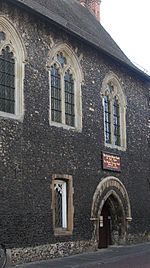 The St Thomas Hospice in Canterbury

A hospice is a type of medical treatment that helps take care of people who are very sick and have an illness that they will not be able to heal from. People who stay in hospices are expected to die soon, but sometimes they get better. Hospices are different from other medicinal treatments because they mostly try to make people feel better instead of trying to cure them. Hospice tries to allow people to die with as little pain as possible.

Hospices have doctors, nurses, and other people who go to patients houses, nursing homes and hospitals to talk to people who want to use hospice medicine.

The Hospice movement was started in England in the 1950s by a nurse named Dame Cicely Saunders. The word Dame at the start of her name means that she did such good work starting hospices that the Queen of England made her a female knight.

A different nurse named Florence Wald brought hospice medicine to the United States because she worked with Dame Cicely Saunders and liked what she did.

All content from Kiddle encyclopedia articles (including the article images and facts) can be freely used under Attribution-ShareAlike license, unless stated otherwise. Cite this article:
Hospice Facts for Kids. Kiddle Encyclopedia.