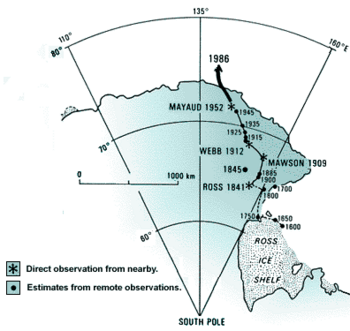 The South Magnetic Pole is the point on the southern hemisphere where the magnetic lines are directly pointing upward. In other words, if there were a magnet inside the earth axis (from north to south), the South Magnetic pole would be at its southern end. Because the magnetic field of the Earth changes, the exact location of ths pole does as well.64°31′48″S 137°51′36″E﻿ / ﻿64.53°S 137.86°E﻿ / -64.53; 137.86, placing it off the coast of Antarctica, between Adelie Land and Wilkes Land. In 2015 it lies at 64°17′S 136°35′E﻿ / ﻿64.28°S 136.59°E﻿ / -64.28; 136.59 (est). That point lies outside the Antarctic Circle. Due to polar drift, the pole is moving northwest by about 10 to 15 kilometers per year. Its current distance from the actual Geographic South Pole is approximately 2860 km. The nearest permanent science station is Dumont d'Urville Station. Wilkes Land contains a large gravitational mass concentration.

All content from Kiddle encyclopedia articles (including the article images and facts) can be freely used under Attribution-ShareAlike license, unless stated otherwise. Cite this article:
South Magnetic Pole Facts for Kids. Kiddle Encyclopedia.