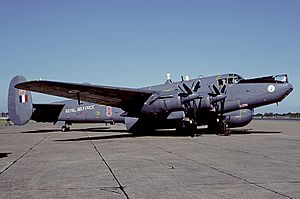 The Avro Shackleton is a four-engine British military aircraft. Its first flight was in March 1949. The Royal Air Force started using it in 1951. It was out of service from 1991. It was also used by the South African Air Force. It was originally designed and built as an ocean and sea reconnaissance aircraft. It was also used as an electronic warfare plane. There were 185 of these built.

All content from Kiddle encyclopedia articles (including the article images and facts) can be freely used under Attribution-ShareAlike license, unless stated otherwise. Cite this article:
Avro Shackleton Facts for Kids. Kiddle Encyclopedia.