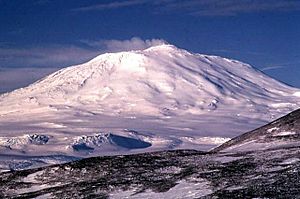 Mount Erebus is the second-highest volcano in Antarctica (after Mount Sidley) and the southernmost active volcano on Earth. It is the sixth-highest ultra mountain on the continent. With a summit elevation of 3,794 metres (12,448 ft), it is located in New Zealand's Ross Dependency on Ross Island, which is also home to three inactive volcanoes: Mount Terror, Mount Bird, and Mount Terra Nova. Several craters are located at the summit, including Side Crater, a nearly circular crater named for its location on the side of the main summit cone.

The volcano has been active since about 1.3 million years ago and is the site of the Mount Erebus Volcano Observatory run by the New Mexico Institute of Mining and Technology.

The volcano was the site of the Air New Zealand Flight 901 accident, which occurred in November 1979.

All content from Kiddle encyclopedia articles (including the article images and facts) can be freely used under Attribution-ShareAlike license, unless stated otherwise. Cite this article:
Mount Erebus Facts for Kids. Kiddle Encyclopedia.