Kids Encyclopedia Facts
Not to be confused with Bird Mountain.

Mount Bird is a 1,765 m (5,791 ft) high shield volcano standing about 7 miles (11 km) south of Cape Bird, the northern extremity of Ross Island. It was mapped by the British National Antarctic Expedition, 1901–04, under Robert Falcon Scott, and apparently named by them after Cape Bird. Endeavour Piedmont Glacier lies on its slopes.

There are several western lobes of the Mount Bird icecap. One of these is Quaternary Icefall, which descends steeply into Wohlschlag Bay 1 mile (1.6 km) south of Cinder Hill. The site was mapped and so named by the New Zealand Geological Survey Antarctic Expedition (NZGSAE), 1958–59, because of the Quaternary glacial period marine shells carried by the glacier and deposited in terminal moraines. Another such lobe is Shell Glacier. 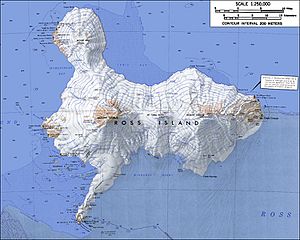 All content from Kiddle encyclopedia articles (including the article images and facts) can be freely used under Attribution-ShareAlike license, unless stated otherwise. Cite this article:
Mount Bird Facts for Kids. Kiddle Encyclopedia.