Mount Terror is a large shield volcano that forms the eastern part of Ross Island, Antarctica. It has numerous cinder cones and domes on the flanks of the shield and is mostly under snow and ice. It is the second largest of the four volcanoes which make up Ross Island and is somewhat overshadowed by its neighbour, Mount Erebus, 30 km (19 mi) to the west. Mount Terror was named in 1841 by Sir James Clark Ross for his second ship, HMS Terror. The captain of Terror was Francis Crozier, a close friend of Ross for whom the nearby Cape Crozier is named. 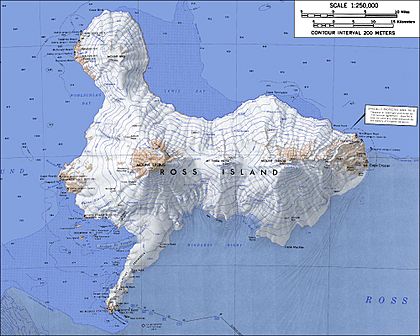 Topographic map of Ross Island off Antarctica (1:250,000 scale).
Mount Terror is on the right, Mount Terra Nova is in the middle, and Mount Erebus is on the left. Mount Bird is in the upper left.

The rocks at the summit have not been studied, but rocks from the lower areas range from 0.82 to 1.75 million years old, and Mount Terror shows no signs of more recent volcanic activity.

The first ascent of Mt. Terror was made by a New Zealand party in 1959.

All content from Kiddle encyclopedia articles (including the article images and facts) can be freely used under Attribution-ShareAlike license, unless stated otherwise. Cite this article:
Mount Terror (Antarctica) Facts for Kids. Kiddle Encyclopedia.