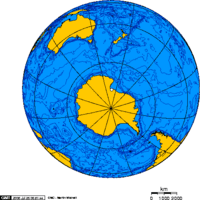 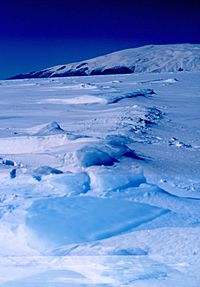 Ross Island is an island which was formed by four volcanoes in the Ross Sea, which can be found near the continent, Antarctica.

Because of the persistent presence of the ice sheet, the island is sometimes mistaken to be a part of Antarctica. Its area is 2,460 km² (950 sq mi); only a small portion of the island is free of ice and snow. The planet's southernmost active volcano, Erebus (3794 m), as well as the dormant volcano Terror (3230 m), are situated on the island. They were named by Ross after his ships HMS Erebus and HMS Terror. The third highest peak is Mount Bird, and on its slopes are Shell Glacier and Endeavour Piedmont Glacier. Abbott Peak stands between Mount Erebus and Mount Bird.

Despite its relatively small size, Ross Island is the world's 6th highest island.

The island was discovered by Sir James Clark Ross in 1841, and it was later named in his honour by Robert F. Scott.

Ross Island was the base for many of the early expeditions to Antarctica. It was and still is the southernmost island reachable by sea. Huts built by Scott's and Shackleton's expeditions are still located on the island, preserved as historical sites.

Today Ross Island is home to New Zealand's Scott Base, and the largest Antarctic settlement, the U.S. Antarctic Program's McMurdo Station. Greenpeace established World Park Base on the island and it ran for five years, from 1987 to 1992.

Ross Island lies within the boundaries of Ross Dependency, which is claimed by New Zealand.

Ross Island supports a colony of about a half million (500 000) Adélie Penguins.

All content from Kiddle encyclopedia articles (including the article images and facts) can be freely used under Attribution-ShareAlike license, unless stated otherwise. Cite this article:
Ross Island Facts for Kids. Kiddle Encyclopedia.