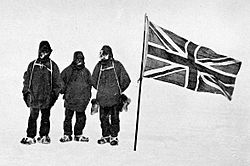 The British Antarctic Expedition 1907–09 was also called the Nimrod Expedition. It was the first of three expeditions to the Antarctic led by Ernest Shackleton. The purpose of the journey was to reach the South Pole.

The group returned as heroes. Shackleton received many awards. These included a knighthood from King Edward VIII. Three years later, a group led by Roald Amundsen was first to arrive at the South Pole.

All content from Kiddle encyclopedia articles (including the article images and facts) can be freely used under Attribution-ShareAlike license, unless stated otherwise. Cite this article:
Nimrod Expedition Facts for Kids. Kiddle Encyclopedia.