Roslyn ( ROZ-lin) is a village in the Town of North Hempstead in Nassau County, on the North Shore of Long Island, in New York, United States. It is the Greater Roslyn area's anchor community. The population was 2,770 at the 2010 census.

In addition to the Village of Roslyn, the following villages and unincorporated areas are considered part of the Greater Roslyn area:

The Village of Roslyn is served entirely by the Roslyn Union Free School District. As such, all children who reside within the village and attend public schools go to Roslyn's schools. 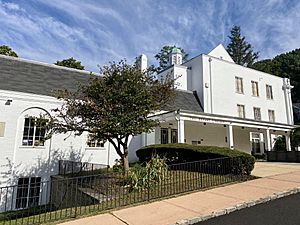 The Village of Roslyn is located entirely within the service area of Roslyn's library district, which is served by the Bryant Library. 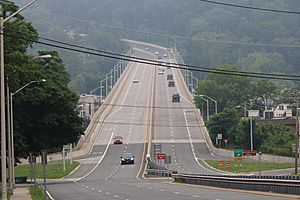 The William Cullen Bryant Viaduct (carrying New York State Route 25A) passes through and serves as a bypass of Roslyn. Prior to the opening of the Bryant Viaduct, 25A traveled through the heart of the village's downtown (along Old Northern Boulevard) and was notorious for its traffic jams in the area.

Furthermore, the Oyster Bay Branch forms much of the village's eastern border.

As of October 2021, the Village of Roslyn is served by the n20H, n21, and n23 bus routes, which are all operated by Nassau Inter-County Express (NICE). NICE's Port Washington Shuttle also offers limited services within the village.

National Grid USA provides natural gas to homes and businesses that are hooked up to natural gas lines in Roslyn.

PSEG Long Island provides power to all homes and businesses within Roslyn. 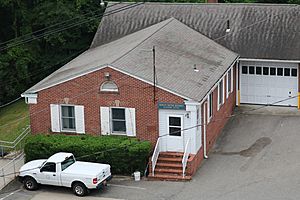 The Roslyn Water District's business office, located within the Village of Roslyn.

Roslyn is located within the boundaries of (and is thus served by) the Roslyn Water District, which provides the entirety of Roslyn with water.

The Village of Roslyn operates a sanitary sewer system. The sewage from the Village's sewer system is pumped to and is treated by the Nassau County Sewage District's treatment plants via the East Hills Interceptor line, which connects the village's system with Nassau County's.

Prior to having the sanitary waste treated by Nassau County's facilities, the village's sewer system expelled the sanitary sewage locally into Hempstead Harbor, contributing to water pollution problems.

All content from Kiddle encyclopedia articles (including the article images and facts) can be freely used under Attribution-ShareAlike license, unless stated otherwise. Cite this article:
Roslyn, New York Facts for Kids. Kiddle Encyclopedia.