Manhasset is a hamlet and census-designated place (CDP) in Nassau County, on the North Shore of Long Island, in New York, United States. The population was 8,080 at the 2010 census.

As with other unincorporated communities in New York, its local affairs are administered by the town in which it is located, the Town of North Hempstead, whose town hall is in Manhasset, making the hamlet the town seat. 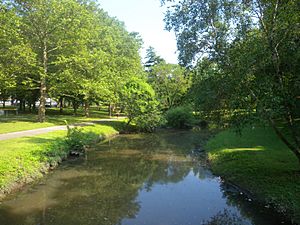 The Matinecock had a village on Manhasset Bay. These Native Americans called the area Sint Sink, meaning "place of small stones." They made wampum from oyster shells. In 1623, the area was claimed by the Dutch West India Company and they began forcing English settlers to leave in 1640. A 1643 land purchase made it possible for English settlers to return to Cow Neck (the peninsula where present-day Port Washington, Manhasset and surrounding villages are located.).

Manhasset Bay was previously known as Schout's Bay (a schout being roughly the Dutch equivalent of a sheriff), Martin Garretson's Bay (Martin Garretson was the Schout at one point), and later Cow Bay or Cow Harbor. Cow Neck was so called because it offered good grazing land. By 1659, there were over 300 cows and 5 mi (8 km) fence separating Cow Neck from the areas south of it. The settlers came to an agreement that each of them could have one cow on the neck for each section of fence the individual had constructed. The area was more formally divided among the settlers when the fence was removed in 1677. Manhasset took on the name Little Cow Neck, Port Washington was known as Upper Cow Neck.

During the American Revolution, Little Cow Neck suffered at the hands of the British. Many structures and properties, such as the 1719 Quaker Meeting House were burned, seized or damaged. The Town of North Hempstead separated from the Town of Hempstead in 1784 because the South, inhabited mainly by Church of England people, was loyal to the king. The Northern communities and villages, dominated by Yankee Congregationalists supported independence.

In 1801 it cost 2 cents to travel between Roslyn and Spinney Hill on North Hempstead Turnpike, the newly opened toll road (now Northern Boulevard).

The Manhasset name was adopted in 1840 and comes from the native word "Manhansett", meaning "island neighborhood." Dairy farming was still a major endeavor but the oyster industry was also on the rise. In 1898, the Long Island Railroad arrived, bringing with it wealthy New Yorkers looking for country homes with easy transportation to more urban areas of New York City. Manhasset Valley and the area called Spinney Hill attracted a number of skilled workers and immigrant families.

The North Hempstead Town Hall opened in Manhasset on Plandome Road in 1907. Town councilmen had previously been meeting in Roslyn taverns after North Hempstead split away from Hempstead in 1775.

The Valley School, originally built to serve the children of the help on the local Gold Coast Estates, eventually came to be serving Manhasset's African American community, was closed in the 1960s by a desegregation lawsuit. It is still standing and is currently used as a community center. The centrally located and antiquated Plandome Road School was demolished in the 1970s, having been replaced by the new Shelter Rock School. It was surprisingly well built and, even though the building sustained serious fire damage after it closed, it took significant time and effort in order to be demolished. Currently, the Mary Jane Davies Park sits on the site of the school.

The three Plandomes—Plandome, Plandome Manor and Plandome Heights—are in the north. Incorporated in 1911, the Village of Plandome is a tight knit community with frontage on Manhasset Bay, the village center with its village green, and the wooded hills area. Its c.1912 Village Hall, a local landmark at the Green, once served as an elementary school. Its own LIRR Station is no more than a mile away from each home in the village. Plandome Manor, incorporated in 1931, is a beautiful section of Manhasset with many water front properties and an area near the railroad station. Plandome Heights, incorporated in 1929, has a rich history of Spanish architectural styles of white stucco exteriors and red-tile roofs, bordering downtown (unincorporated) Manhasset.

In 1922, Louis Sherry, the wealthy confectioner, sold his estate and mansion to prominent newspaper publisher Frank A. Munsey. Over time, Munsey amassed 663 acres (268 ha) which included all of the present day Munsey Park, a small village where vintage street lamps lace narrow, tree lined roads and traditional homes grace manicured properties. Munsey had no heirs, no family and his entire estate and assets were left to the Metropolitan Museum of Art in New York . One portion of the Munsey lands—the Strathmore area and the magnificent chateau—was sold to Mrs. Graham Fair Vanderbilt. The 320 acres (129 ha) north were shaped into a model restricted community to reflect the generosity of Frank Munsey. The Metropolitan Museum developed a model community with all the homes built as authentic American colonial reproductions and the streets named for American artists. A walk along Copley pond in Munsey Park, there never were, nor are there today, anywhere in the village any adjacent or nearby homes of identical design.

Once owned by John Hay Whitney, publisher of the New York Herald Tribune and Ambassador to England, the Whitney estate, known as Greentree, encompasses almost a quarter of the lands in Manhasset.

Shelter Rock is an 1800-ton granite boulder, the largest known on Long Island, deposited by a glacier more than 11,000 years ago near what is now Shelter Rock Road, in the Village of North Hills. The Matinecock Indians used its 30-foot overhang for shelter in their village on the site. Many legends woven by both Indians and colonists who arrived in the 1600s are still told. By the 1900s a dozen families owned huge estates, including railroad magnate Nicholas F. Brady, who built Inisfada, once one of the largest houses in the country. In the past few decades, the area developed into several private gated communities surrounding Deepdale Golf Club, founded by William K. Vanderbilt II in 1924, using part of his Deepdale summer estate at Lake Success.

The name of Flower Hill can be traced to the early 18th century when the village consisted of several residences and other buildings located where today Port Washington Boulevard, Bonnie Heights Road and Country Club Drive intersect. This was a village that served farmers whose land was located along Port Washington Boulevard and extended down to Hempstead Harbor. Three of the original farmhouses in Flower Hill are still in existence: The Willets House, on the west side of Port Washington Boulevard, home of the Cow Neck Historical Society, The Williams House, also on the west side of Port Washington Boulevard and the Hewlett Homestead on the east side. Proximity to the water was important because those farms shipped vegetables, grain and fruits to New York City from docks in Roslyn or Manhasset Bay. In the spring many flowering cherry trees line the road to the farms with fields and meadows always filled with wild violets and other lovely wildflowers. There are even some apple trees still standing that date to the days when Flower Hill farms sold the produce from their apple, pear and peach orchards. 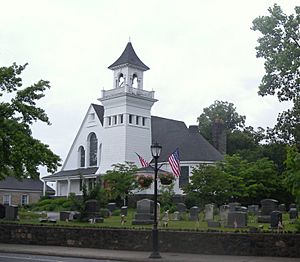 "Love Ludlow" (2005) The Sundance hit was shot mostly in and around Manhasset. Myra and Ludlow's entire Queen's railroad apartment was a set built in the basement of Christ's Church in Manhasset. 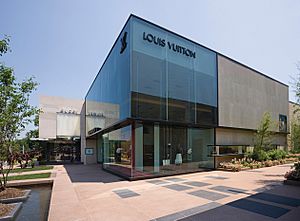 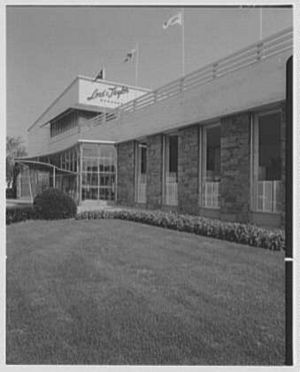 Manhasset is well known for its high-end premium, open-air shopping center, the Americana Manhasset. The center is situated along Northern Boulevard's "Miracle Mile" which is referred to in Billy Joel's 1980 hit "It's Still Rock and Roll to Me". The Americana first opened in 1956 as a simple community-style shopping mall; however, in the early 2000s, it gradually it catered to luxury goods boutiques such as Ralph Lauren, Brooks Brothers, Prada, Giorgio Armani, Chanel, Theory, Louis Vuitton, Hermès, and Burberry, among others. In addition, a short distance away from the Miracle Mile is Lord & Taylor, which was that brand's first branch store in America. In addition to Lord & Taylor, Manhasset has supported branches of some of the most well known stores in New York over the years—B. Altman and Company, Bonwit Teller, Abraham & Straus, Best & Co., Arnold Constable, Franklin Simon & Co., Peck & Peck, W. & J. Sloane, J.J. Newberry and Waldbaum's.

The commercial center of Manhasset is situated around the railroad station on Plandome Road, where the LIRR connects directly into Manhattan for a 37-minute commute. The area has bakeries, pizzerias, delis, bars, coffee shops, and a movie theater. Centralized in town is a small park and a gazebo. The public library is located 1 block east of Plandome Road on the corner of Onderdonk Avenue and Northern Boulevard, adjacent to the historic Quaker Meeting House.

The North American headquarters of Sabena were located in a 36,000 square feet (3,300 m2) office building in Manhasset. In April 2002 Knightsbridge Properties Corp. bought the building for $4.9 million. Due to the bankruptcies of Sabena and Swissair, the real estate deal took over a year to finish. During that month the building was 30% occupied. Sabena was scheduled to move out of the building on May 10, 2002. The buyer planned to spend an additional $2 million to convert the building into a multi-tenant, Class A office and medical facility. 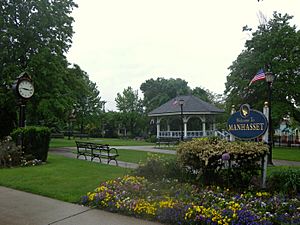 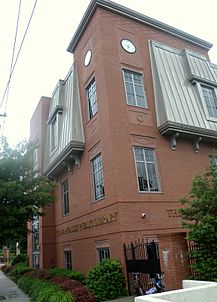 Manhasset is mainly served by the Manhasset Union Free School District, and is also home to numerous private schools. Schools in Manhasset include:

The Manhasset School District covers not only the unincorporated areas discussed in the census reports, but several incorporated villages including Plandome, Plandome Manor, Munsey Park and part of Flower Hill. Manhasset High School is rated among the top in the country. In the 2010 Newsweek magazine's annual list of the top American high schools, Manhasset is ranked 87th nationally out of the 1,700 schools evaluated.

Manhasset has a locally-operated School Community Association (SCA) instead of electing to be a local chapter of the Parent Teacher Association (PTA). The SCA, which boasts great support within the community, annually hosts the SCA fair at Munsey Park School to raise money. Membership dues and profits from fund-raising efforts benefit the schools in Manhasset; no percentage of funds goes to a state or national offices of a larger organization, thus all monies raised benefit the Manhasset schools directly.

All content from Kiddle encyclopedia articles (including the article images and facts) can be freely used under Attribution-ShareAlike license, unless stated otherwise. Cite this article:
Manhasset, New York Facts for Kids. Kiddle Encyclopedia.