Plandome Manor is a village in Nassau County, on the North Shore of Long Island, in New York, United States. The majority of the village is considered part of the Greater Manhasset area, which is anchored by Manhasset. The easternmost part of the village is more closely associated with Port Washington. The population was 872 at the 2010 census.

The Incorporated Village of Plandome Manor is in the Town of North Hempstead, and is the northernmost of the three Plandomes.

The Inc. Village of Plandome Manor, incorporated in 1931, as well as the villages of Plandome and Plandome Heights to its south, derives its name from the Latin 'Planus Domus', meaning plain, or level home. The manor house of Matthias Nicoll who was an early mayor of New York City and among the first generation of the Nicoll family on Long Island, was a wood frame home built in the 1670s, and one of the first homesteads in this area of Cow Neck, the original name of the Manhasset/Port Washington Peninsula. The manor itself was torn down in 1998 and replaced with another estate.

Author Frances H. Burnett, author of The Secret Garden, built her home, Fairseat, in Plandome Park in 1908, and lived there until her death in 1924. Her son, Vivian, and his wife Constance, had built a home nearby on Bayview Road after their marriage. Frances Burnett's nephew, publisher Archer P. Fahnestock moved into Fairseat after her death, but the home burned down leaving only the stucco carriage house and garden intact. In 1940, Fahnestock sold it to Leroy Grumman. 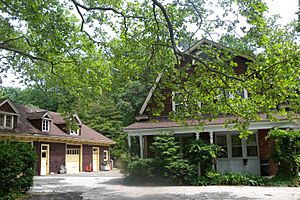 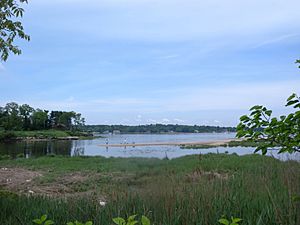 There were 281 households, out of which 42.3% had children under the age of 18 living with them, 80.4% were married couples living together, 3.2% had a female householder with no husband present, and 13.9% were non-families. Of all households 12.8% were made up of individuals, and 8.9% had someone living alone who was 65 years of age or older. The average household size was 2.98 and the average family size was 3.24.

The Plandome station on the Long Island Rail Road's Port Washington Branch, located in adjacent Plandome just over the Plandome Manor-Plandome border, is the nearest station to the village. There is a lot at the station reserved exclusively for Plandome Manor residents, and a walkway exists between the station and West Circle Drive.

National Grid USA provides natural gas to homes and businesses that are hooked up to natural gas lines in Plandome Manor.

PSEG Long Island provides power to all homes and businesses within Plandome Manor.

Plandome Manor is not connected to any sanitary sewer systems. As such, all areas within the village rely on cesspools and septic systems.

As of 2019, trash collection services in Plandome Manor are provided by Meadow Carting, under contract with the Village of Plandome Manor.

All content from Kiddle encyclopedia articles (including the article images and facts) can be freely used under Attribution-ShareAlike license, unless stated otherwise. Cite this article:
Plandome Manor, New York Facts for Kids. Kiddle Encyclopedia.