Plandome is a village in the Town of North Hempstead in Nassau County, on the North Shore of Long Island, in New York, United States. It is considered part of the Greater Manhasset area, which is anchored by Manhasset. The population was 1,349 at the 2010 census.

The Incorporated Village of Plandome was ranked fifth on Forbes' 10 most affluent U.S. communities list in 2009.

The Great Neck and Port Washington Railroad, a subsidiary of the Long Island Rail Road built what is today known as the Port Washington Branch through the community in 1898; Plandome became a flag stop until it received a station in 1909.

The Village of Plandome was incorporated in 1911. It, as well as surrounding villages Plandome Manor and Plandome Heights, derives its name from the Latin 'Planus Domus', meaning plain, or level home.

The Almeron and Olive Smith House at 50 South Drive is dated to 1907 and was listed on the National Register of Historic Places in 2006.

The Plandome Fire Department is an all-volunteer fire department that was organized in 1913.

The Willets Famhouse circa 1810 is still extant on Willets Lane. It was built by brewer George Willets of the Willets family of Cow Neck. The house was recently restored and is not currently landmarked.

There are many historically significant houses belonging to former financiers and industrialists within the village.

The village has a large "green" where many events are held. It is also the site of the village hall which at one point was used as a school building. 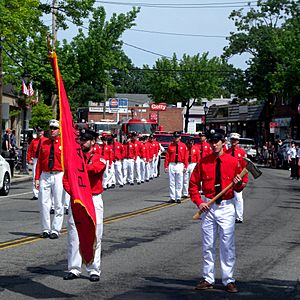 There were 409 households, out of which 42.8% had children under the age of 18 living with them, 82.4% were married couples living together, 3.7% had a female householder with no husband present, and 11.7% were non-families. 11.5% of all households were made up of individuals, and 9.0% had someone living alone who was 65 years of age or older. The average household size was 3.08 and the average family size was 3.34.

Plandome is a bedroom community of the City of New York. As such, a significant number of Roslyn Estates residents commute to/from New York for work.

The Village of Plandome is located entirely within the boundaries of the Manhasset Union Free School District. As such, all children who reside within Plandome and attend public schools go to Manhasset's schools.

Plandome is located entirely within the boundaries of the Manhasset Library District.

Major roads in Plandome include Plandome Road and Stonytown Road. 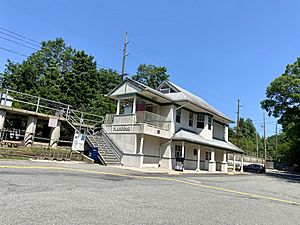 The Plandome station on the Long Island Rail Road's Port Washington Branch is located within the village. Plandome residents are able to obtain village parking permits in order to park at the station's two village-owned lots.

National Grid USA provides natural gas to homes and businesses that are hooked up to natural gas lines in Plandome.

PSEG Long Island provides power to all homes and businesses within Plandome.

As of August 2021, Welsbach Electric is Plandome's street lighting contractor.

Plandome is not connected to any sanitary sewer systems. As such, all areas within the village rely on cesspools and septic systems.

As of August 2021, trash collection services in Plandome are provided by Dejana Industries, under contract with the Village of Plandome.

Plandome is served by the village-owned and operated Plandome Water District, which exclusively serves and provides the village with water.

All content from Kiddle encyclopedia articles (including the article images and facts) can be freely used under Attribution-ShareAlike license, unless stated otherwise. Cite this article:
Plandome, New York Facts for Kids. Kiddle Encyclopedia.