Roslyn Estates is a village in the Town of North Hempstead in Nassau County, on the North Shore of Long Island, in New York, United States. It is considered part of the Greater Roslyn area, which is anchored by the Incorporated Village of Roslyn. The population was 1,251 at the 2010 census.

According to the United States Census Bureau, the village has a total area of 0.4 square miles (1.0 km2), all of it land.

There were 401 households, out of which 46.9% had children under the age of 18 living with them, 81.3% were married couples living together, 6.0% had a female householder with no husband present, and 11.7% were non-families. 9.7% of all households were made up of individuals, and 6.7% had someone living alone who was 65 years of age or older. The average household size was 3.02 and the average family size was 3.22.

Roslyn Estates is a bedroom community of the City of New York, which is how the community was originally developed to be by Dean Alvord. As such, a significant number of Roslyn Estates residents commute to/from New York for work.

The village itself is predominantly residential in character, with the heavy majority of lots within the village being zoned for single-family homes. The village has a business district along the south side of Northern Boulevard, which is where the heavy majority of businesses within the village are located. The exceptions are the former Roslyn Estates Sales Office and former Highland Elementary School towards the southeastern edge of the village; these buildings are now a restaurant and house of worship, respectively. 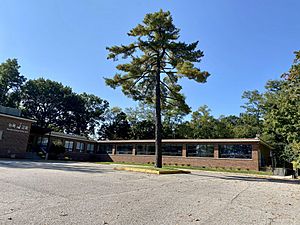 The Village of Roslyn Estates is located entirely within the boundaries of the Roslyn Union Free School District. As such, all children who reside within Roslyn Estates and attend public schools go to Roslyn's schools.

The Roslyn Union Free School District's former Highland Elementary School was located in the village; the building became a synagogue after the school's closure and would later become a church, which it remains in use as in 2022.

Roslyn Estates is located within the boundaries of Roslyn's library district, which is served by the Bryant Library.

There are roughly 7.8 miles (12.6 km) of village roadways within Roslyn Estates.

Roslyn Estates features a winding and organic street layout, which meanders and can be unpredictable. Many streets, such as The Hemlocks and The Birches, use a street naming convention based on nature, including plants, flowers, and trees, and begin with "The."

No rail service passes through Roslyn Estates. The nearest Long Island Rail Road stations to the village are Roslyn on the Oyster Bay Branch and Manhasset on the Port Washington Branch. 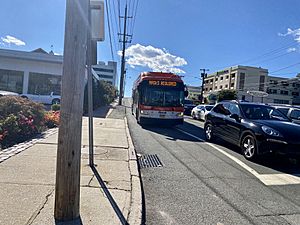 An n23 bus on Northern Boulevard in Roslyn Estates in September 2021.

National Grid USA provides natural gas to homes and businesses that are hooked up to natural gas lines in Roslyn Estates.

PSEG Long Island provides power to all homes and businesses within Roslyn Estates.

The remainder of Roslyn Estates relies on cesspools and septic systems. 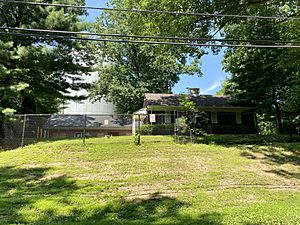 Roslyn Estates is located within the boundaries of the Roslyn Water District, which provides the entirety of Roslyn Estates with water.

All content from Kiddle encyclopedia articles (including the article images and facts) can be freely used under Attribution-ShareAlike license, unless stated otherwise. Cite this article:
Roslyn Estates, New York Facts for Kids. Kiddle Encyclopedia.