Bonnyrigg (Scots: Bonnyrigg) is a town in Midlothian, Scotland, eight miles (13 kilometres) southeast of Edinburgh city centre. The town had a population of 14,663 in the 2001 census which rose to 15,677 in the 2011 census, both figures based on the 2010 definition of the locality which, as well as Bonnyrigg and the adjacent settlement of Lasswade, includes Polton village, Poltonhall housing estate and modern development at Hopefield. The estimated population for 2018 is 18,120, the highest of any town in Midlothian. Along with Lasswade, Bonnyrigg is a twin town with Saint-Cyr-l'École, France. 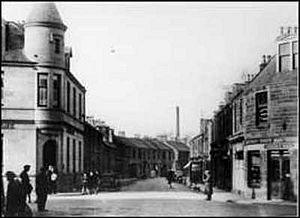 Bonnyrigg Toll in the early 1900s

Early maps of the locality show various versions of the village name. It first appears as a small hamlet on William Roy's map of c.1750 as Bonnebrig. From 1763, it is called Bannockrigg or Bannoc Rig. In 1817 the village is named Bonny Ridge, then Bonny Rigg in 1828, Bonnyrig in 1834, Bonny Rig in 1850 until, finally, the Ordnance Survey map of 1850-1852 standardises the name as Bonnyrigg.

In 1865, the villages of Bonnyrigg, Red Row, Polton Street, Hillhead and Broomieknowe combined to form the burgh of Bonnyrigg, and then, in 1881, the village of Lasswade and part of Broomieknowe combined to form the burgh of Lasswade. In 1929 the two burghs joined together to form the burgh of Bonnyrigg & Lasswade. This burgh lasted for 45 years until it was abolished in 1974/75, when local government changes were introduced. Bonnyrigg was a mining village until the 1920s, while its carpet factory was demolished in 1994. The town centre mostly dates from the 19th century, though buildings at the main crossroads were rebuilt in the 1960s. In 2006, Bonnyrigg town centre benefited from £1.5m of environmental improvements. Natural stone paving replaced the existing concrete paving slabs in areas across the town centre and new street lighting and furniture were installed. 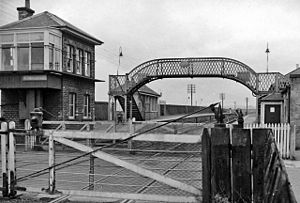 Bonnyrigg lies on the B704 (High Street)/(Dundas Street) and the A6094 (Polton Street)/(Lothian Street) which cross at Bonnyrigg Toll. The most frequent bus service is the Lothian Buses service 31 which goes from East Craigs in the west of Edinburgh via Princes Street, passing Bonnyrigg Toll every 10 minutes at peak times and terminating alternately at Hopefield and Polton. The X31 service runs from Haymarket in Edinburgh to Rosewell via Bonnyrigg Toll and Hopefield. Lothian Buses service 49 from Fort Kinnard to Rosewell and East Coast Buses service 140 from Musselburgh to Penicuik also serve the town.

Bonnyrigg railway station served the town from 1855 until 1962 for passengers, freight services continued until 1965 when the station closed completely. The opening of the Borders Railway in September 2015 has re-connected Bonnyrigg to the national rail network via nearby Eskbank railway station.

For walkers the Penicuik–Dalkeith Walkway passes close by, and for cyclists National Cycle Route 1 plus NCN 196 pass through the town.

Lasswade Rugby Football Club was founded in 1921 and initially played in a field to the west of Dobbies Road before moving to their current ground at Hawthornden in 1974. They compete in Scottish National League Division Three.

The local golf course is Broomieknowe Golf Club. It is an 18-hole course with a par of 70. Mark Patchett is the resident professional.

All content from Kiddle encyclopedia articles (including the article images and facts) can be freely used under Attribution-ShareAlike license, unless stated otherwise. Cite this article:
Bonnyrigg Facts for Kids. Kiddle Encyclopedia.