Kids Encyclopedia Facts
This page is about the town in Scotland. For other places named Dalkeith, see Dalkeith (disambiguation).
"Eskbank" redirects here. For the hamlet in Canada, see Eskbank, Saskatchewan.

Dalkeith ( dal-KEETH; Scottish Gaelic: Dail Cheith, IPA:[ˈt̪alˈçe]) is a town in Midlothian, Scotland, on the River Esk. It was granted a burgh of barony in 1401 and a burgh of regality in 1540. The settlement of Dalkeith grew southwestwards from its 12th-century castle (now Dalkeith Palace). Dalkeith has a population of 12,342 people according to the 2011 census.

The town is divided into four distinct areas: Dalkeith proper with its town centre and historic core; Eskbank (considered to be the well-heeled neighbourhood of Dalkeith with many large Victorian and newer houses) to its west; Woodburn (primarily a working class council estate with pockets of new housing developments) to its east; and Newbattle (a semi-rural village with its abbey) to the south.

Dalkeith is the main administrative centre for Midlothian. It is twinned with Jarnac, France. In 2004, Midlothian Council re-paved Jarnac Court in honour of Dalkeith and Jarnac's long standing link.

On the north-eastern edge of Dalkeith at Woodburn is the Dalkeith Campus (completed 2003) – housing both Dalkeith High School and St David's Roman Catholic High School plus community leisure facilities. 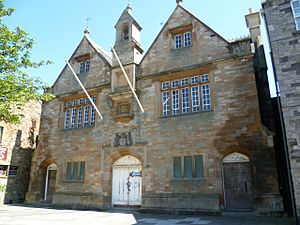 One of the earliest historical references to Dalkeith is found in the Chronicles of Jean Froissart who stayed at Dalkeith Castle for fifteen days. He writes of the Battle of Otterburn and the death of James Douglas, 2nd Earl of Douglas:

"I, author of this book, in my youth had ridden nigh over all the realm of Scotland, and I was then fifteen days in the house of earl William Douglas, father to the same earl James, of whom I spake of now, in a castle of five leagues from Edinburgh which is called in the country Dalkeith. The same time I saw there this earl James, a fair young child, and a sister of his called the lady Blanche."

In 1650, Oliver Cromwell's army came to Dalkeith. His officer General George Monck, was Commander in Scotland, and the government of the country was based out of Dalkeith castle.

In the 17th century, Dalkeith had one of Scotland's largest markets in its exceptionally broad High Street.

In 1831, Dalkeith was linked to Edinburgh by a railway line that transported coal, minerals, and agricultural produce. Two decades later, in 1853, a Corn Exchange, at the time the largest indoor grain market in Scotland, was built.

In 1879, Dalkeith was where William Ewart Gladstone started his campaign for British Prime Minister, which became known as the "Midlothian Campaign".

Until 2008, Dalkeith was on the A68, one of the main routes south from Edinburgh to Jedburgh and across the border to Darlington. A bypass to take traffic away from the town centre was completed in September 2008; this then took the A68 number, and the old route of the A68 is now the A6106.

Other main roads serving Dalkeith are:

The re-building of the northern section of the Waverley Railway Line re-connected Dalkeith to the national rail network after a gap of more than 40 years, with a station at Eskbank on the western edge of Dalkeith. Construction commenced in late 2012, and the line re-opened to passenger services on 6 September 2015.

For walkers, the Penicuik–Dalkeith Walkway passes close by.

The town is home to Dalkeith Thistle F.C., based at King's Park. The club was formed in 1892 and now plays in the East of Scotland Football League, having spent most of its history in the Scottish Junior Football Association.

The established club is affiliated to Dalkeith Thistle Community Football Club, based at Cowden Park, Woodburn; The club is 'SFA Quality Mark' accredited and run by volunteers.

Dalkeith RFC play in the Scottish Rugby Union East Leagues. The club was the first in Midlothian to open full membership to women and the first in the county to run a women's side. Notable former players include Sir David Murray, whose car crash on the way back from a match in North Berwick ended his rugby career and led to him focusing on his business empire. Adam Robson, who went on to become President of the Scottish Rugby Union, also played for the club.

All content from Kiddle encyclopedia articles (including the article images and facts) can be freely used under Attribution-ShareAlike license, unless stated otherwise. Cite this article:
Dalkeith Facts for Kids. Kiddle Encyclopedia.