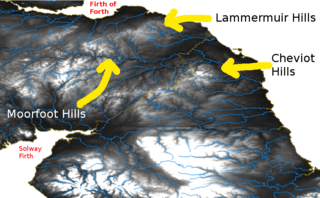 The Moorfoot Hills are a range of hills south of Edinburgh in east central Scotland, one of the ranges which collectively form the Southern Uplands.

The name Moorfoot was recorded as Morthwait in 1142. The second element is Old Norse þveit meaning "clearing, meadow, paddock". The first element may be Norse mór or Old English mōr, both meaning "moor, heath".

The scarp lies immediately to the southeast of the Lammermuir Fault, a Caledonoid fault with a downthrow to the northwest. To its southeast and parallel with it are three further NE-SW aligned reverse faults which are associated with the final stages of the closure of the Iapetus Ocean during the Caledonian orogeny, as are the sedimentary rocks which they affect. The southernmost is known as the Orlock Bridge Fault, a structure which can be traced southwest into Ireland and the northernmost of the three is the Fardingmullach Fault. Two strike slip faults are mapped affecting the rock sequence an disrupting the faults already noted; both can be tied with landscape features. The more westerly coincides with the north–south alignment of the upper course of the River South Esk and continues south through the range. Further east, a similar fault defines the course of the Dewar Burn and continues north through Peat Hill to Whitelaw Cleugh near the northeaster end of the main scarp.

Since the last ice age, peat deposits have accumulated particularly around the plateau surfaces surrounding Blackhope Scar and Jeffries Corse.

The range runs from Peebles in the Scottish Borders, in a north easterly direction to Tynehead near the A7 road in Midlothian. The highest point of the Moorfoot Hills is Windlestraw Law, at 659 metres. Parts of the Moorfoot Hills are designated a Special Area of Conservation. The hills in the range over 2000ft are:

The Hills are also home to Bowbeat Wind Farm which is owned by E.on. The site consists of 24 Nordex N60 turbines which lie between Bowbeat Hill, Blackhope Scar and Dundreich Hill. The wind farm was completed in September 2002 and at the time was Scotland's largest wind farm.

All content from Kiddle encyclopedia articles (including the article images and facts) can be freely used under Attribution-ShareAlike license, unless stated otherwise. Cite this article:
Moorfoot Hills Facts for Kids. Kiddle Encyclopedia.