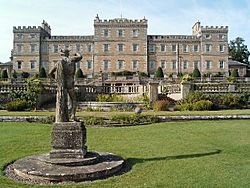 Mellerstain House, viewed from the lawn to the south east. 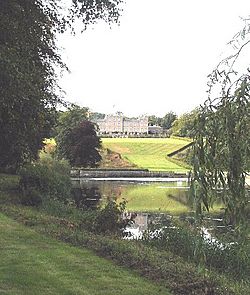 Mellerstain Lake, with the house seen in the distance.

Mellerstain House is a stately home around 8 miles (13 kilometres) north of Kelso in the Borders, Scotland. It is currently the home of the 14th Earl of Haddington, and is a historical monument of Scotland.

Mellerstain was built between 1725 and 1778. The architect William Adam initially designed the east and west wings for George Baillie (1664–1738) and his wife Lady Grisell (1665–1746), daughter of Patrick Hume, Earl of Marchmont. Work ceased after the wings were completed, and it was another 45 years before George Baillie commissioned Robert Adam to design and build the main mansion house. George was the second son of Charles, Lord Binning (1697–1732), heir to the 6th Earl of Haddington, and he inherited the Mellerstain estate when his aunt Grisell, Lady Murray, died in 1759. He had changed his name from Hamilton to Baillie as a mark of respect.

The mansion house is possibly the only remaining complete building designed by Robert Adam, as most of his other works were additions to existing buildings. The Adelphi Building, in London, was a speculative neoclassical terraced housing development by the Adam brothers but is now largely demolished, leaving Mellerstain House as an important record of Robert Adam's work.

Original wallpapers, hand printed in the 18th and 19th centuries, can be seen in the bedrooms. The Great Gallery displays costumes, fans, embroideries and documents.

The house stands in 80 hectares of parkland, with an Italianate formal terraced garden at the rear, with a sweeping stretch of lawn descending to a lake. These gardens were designed around 1910 by Sir Reginald Blomfield.

All content from Kiddle encyclopedia articles (including the article images and facts) can be freely used under Attribution-ShareAlike license, unless stated otherwise. Cite this article:
Mellerstain House Facts for Kids. Kiddle Encyclopedia.