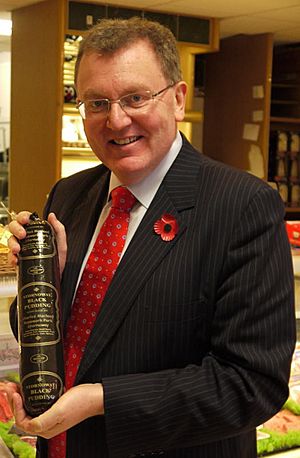 David Gordon Mundell, WS (born 27 May 1962) is a Scottish Conservative Party politician and solicitor. He was appointed Secretary of State for Scotland in May 2015, the first openly gay Conservative to hold a ministerial position in the Cabinet of the United Kingdom. He has been the Member of Parliament (MP) of Dumfriesshire, Clydesdale and Tweeddale in Scotland since 2005.

Born in Dumfries, Mundell grew up in Newton Wamphray and Lockerbie. He attended Lockerbie Academy before reading Law at the University of Edinburgh (MA), also gaining a Diploma in Legal Practice (Dip LP). After further studies, he graduated from Strathclyde Business School as MBA.

Having become a Young Conservative aged 14, he switched to the Social Democratic Party (SDP) while at university in 1981. In 2002, he stated: "the first Thatcher Government did get a bit bogged down and it wasn't really the radical government that subsequently emerged,... And the fact that you had a completely new opportunity to wipe the slate clean, with no baggage, was a very attractive thing".

He practised as a solicitor before joining BT as Group Legal Advisor for Scotland in 1991. He became BT Scotland's Head of National Affairs, remaining with BT until being elected as an MSP. Mundell served as an SDP Councillor for Annandale and Eskdale from 1984–86 and then for Dumfries and Galloway until 1987, while a postgraduate student.

Mundell is a member of the Society of Writers to Her Majesty's Signet (WS) and of the Law Society of Scotland.

Mundell was elected to the Scottish Parliament in 1999 and 2003 as a "list" MSP for the South of Scotland.

In the 2005 general election, Mundell was elected as MP for the Dumfriesshire, Clydesdale and Tweeddale constituency. Following his election to Westminster, Mundell resigned from the Scottish Parliament in June 2005. His seat was taken by Derek Brownlee, who was next on the Conservative's South of Scotland candidate list. As the sole Conservative Scottish parliamentary representative, David Cameron (as Leader of HM Opposition) appointed him Shadow Secretary of State for Scotland in December 2005.

Mundell was among the 18 MPs (either Scottish or representing Scottish constituencies) who supported the Commons Motion stating football "should not be any different from other competing sports and our young talent should be allowed to show their skills on the world stage", thereby endorsing the idea of Team GB entering a British football team in the London 2012 Olympics. Football's governing bodies in Scotland, Wales and Northern Ireland oppose a Great Britain team, fearing it would stop them competing as individual nations in future tournaments.

Prior to the 2010 general election, Mundell served as the Conservative Shadow Scottish Secretary. Following that election, the Conservative Party formed a coalition government with the Liberal Democrats. He held the non-cabinet role of Parliamentary Under-Secretary of State for Scotland, since the office of Secretary of State for Scotland was given to Liberal Democrat MP Danny Alexander (then Michael Moore and Alistair Carmichael), in view of the Liberal Democrats' greater representation of Scottish seats. On 9 June 2010, Mundell was appointed a Privy Counsellor.

Mundell was returned to Parliament at the 2015 general election with a much reduced majority of 798 votes (1.5%), although the Conservative Party's share of the vote increased by 1.8%. He is to be a part-time member of the cabinet committee working on strategies for Brexit.

In 2015, Mundell opened a food bank in the Dumfries and Galloway constituency, which adjoins his own and was at the time represented by the Scottish National Party's Richard Arkless. After the opening, Mundell was escorted from an angry anti-austerity demonstration by police. Mundell, who had previously denied that welfare reform changes were behind the increased demand for food banks, was accused of hypocrisy by opponents who said the opening was "nothing to celebrate". Mundell said he was willing to work with all local organisations who wanted to eradicate poverty.

On 13 January 2016, Mundell publicly came out as gay on his personal website and he is believed to be the first openly-gay Conservative cabinet minister. His nickname is 'Fluffy'.

He was previously married to Lynda Carmichael but the couple have divorced. He has three children, one of whom, Oliver Mundell, successfully stood as a Conservative candidate for the Scottish Parliament in May 2016.

All content from Kiddle encyclopedia articles (including the article images and facts) can be freely used under Attribution-ShareAlike license, unless stated otherwise. Cite this article:
David Mundell Facts for Kids. Kiddle Encyclopedia.