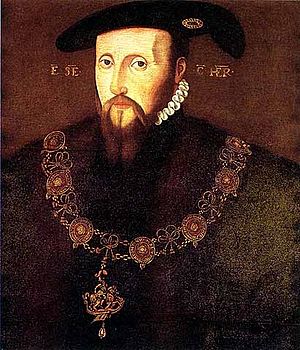 Edward Seymour, 1st Duke of Somerset (c. 1506 – 22 January, 1552) was an English peer and politician. He was Lord Protector of England during the reign of King Edward VI, because Edward was too young to rule alone. He served as Lord Protector from 1547 to 1552, when he was executed for treason.

All content from Kiddle encyclopedia articles (including the article images and facts) can be freely used under Attribution-ShareAlike license, unless stated otherwise. Cite this article:
Edward Seymour, 1st Duke of Somerset Facts for Kids. Kiddle Encyclopedia.