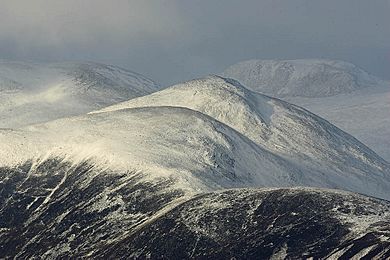 Breadalbane – from Scottish Gaelic Bràghad Albainn, "the upper part of Alba" – is a region of the southern/central Scottish Highlands, traditionally comprising the watershed of Loch Tay (i.e. Glen Dochart, Glen Lochay, and the banks of Loch Tay itself). The Breadalbane Hydro-Electric Scheme lies within the region.

The Atholl and Breadalbane Gathering is a popular 2/4 March tune for the Great Highland Bagpipes.

Much of Breadalbane is in the Loch Lomond and the Trossachs National Park. Ben More is the highest mountain in the national park.

The Breadalbane area of the National Park is subdivided into four communities, covered by the community council areas of Balquhidder, Killin, St Fillans, and Strathfillan.

Breadalbane is a village in the province of Prince Edward Island in Canada.

All content from Kiddle encyclopedia articles (including the article images and facts) can be freely used under Attribution-ShareAlike license, unless stated otherwise. Cite this article:
Breadalbane, Scotland Facts for Kids. Kiddle Encyclopedia.