Ben More (Scottish Gaelic: A' Bheinn Mhòr, meaning "the great mountain") is a mountain in the southern Highlands of Scotland, near Crianlarich. It is the highest of the so-called Crianlarich Hills to the south-east of the village, and there is no higher land in the British Isles south of Ben More. It is separated from Stob Binnein 3,822ft (1,165 m) by the Bealach-eadar-dha Beinn, meaning "col between two hills". It is the highest peak in the Loch Lomond and The Trossachs National Park.

The simplest ascent starts from Benmore Farm on the A85. Initially one should follow the path leading up Benmore Burn, before leaving this path and heading up the northwest ridge of Ben More. The ridge is unrelentingly steep, rising 1,000 metres (3,281 ft) in about 2.5 miles (4.0 km). The north-east ridge may prove a preferable alternative, being craggier and less steep. To reach this the walker should follow the burn of Allt Coire Chaorach, before striking for the ridge of Sròn nam Fòirsairean once clear of the forestry that cloaks the lower slopes of this side of Ben More. This route is around 5 kilometres (3.1 mi) long.

Ben More is often climbed in conjunction with Stob Binnein by descending to the Bealach-eadar-dha Beinn and then on to the second peak. Descent may be made from the col direct to Benmore Burn.

Ben More's north side contains a long-lasting snow patch, which – uniquely in the Southern Highlands – is named on a 1:25000 Ordnance Survey map, and is called the Cuidhe Chrom (crooked wreath), on account of the shape it forms in late spring/early summer. This patch frequently lasts until well into June and sometimes July. The similar name Cuidhe Cròm appears as a summit near Lochnagar.

In the event of an incident, Killin Mountain Rescue Team are on duty.

A webcam located at the eastern edge of Crianlarich captures Ben More. It provides updates every 10 minutes. See http://www.benmorewebcam.co.uk

On 19 January 1973, a Vickers Viscount of British European Airways took off from Glasgow International Airport at about 2:20pm on a test flight to be conducted at Flight Level (FL) 40; in the conditions prevailing at the time FL40 was equivalent to about 3,850 feet (1,173 m). At about 2:32pm the aircraft flew into Ben More about 600 feet (183 m) northeast and 100 feet (30 m) below the summit while flying in a westerly direction. The two pilots and two passengers on board were killed in the accident. The Air Accidents Investigation Branch (AAIB) found that the aircraft struck Ben More whilst flying over snow-covered high terrain in marginal visual meteorological conditions and said that "Failure to maintain a safe altitude and insufficient attention to navigational procedures were contributory factors". 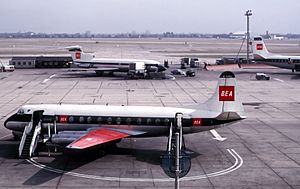 On 12 May 2012, two men were killed when their microlight aircraft crashed into the mountain at about 12:00 midday.

All content from Kiddle encyclopedia articles (including the article images and facts) can be freely used under Attribution-ShareAlike license, unless stated otherwise. Cite this article:
Ben More (Crianlarich) Facts for Kids. Kiddle Encyclopedia.