Kids Encyclopedia Facts
This page is about the county in Scotland. For other uses, see Perthshire (disambiguation).

Perthshire ( Scottish Gaelic: Siorrachd Pheairt), officially the County of Perth, is a historic county and registration county in central Scotland. Geographically it extends from Strathmore in the east, to the Pass of Drumochter in the north, Rannoch Moor and Ben Lui in the west, and Aberfoyle in the south; it borders the counties of Inverness-shire and Aberdeenshire to the north, Angus to the east, Fife, Kinross-shire, Clackmannanshire, Stirlingshire and Dunbartonshire to the south and Argyllshire to the west. It was a local government county from 1890 to 1930.

Perthshire is known as the “big county”, due to its roundness and status as the 4th largest historic county in Scotland. It has a wide variety of landscapes, from the rich agricultural straths in the east, to the high mountains of the southern Highlands.

The two-tier system introduced in 1975 was superseded by a system of unitary authorities in 1996.

The area of the former council is now divided between the Local Government council areas of Clackmannanshire, Perth and Kinross and Stirling.

The area included in Dundee in 1975 was transferred to Perth and Kinross.

Prior to the 1890s Perthshire's boundaries were irregular: the parishes of Culross and Tulliallan formed an exclave some miles away from the rest of the county, on the boundaries of Clackmannanshire and Fife; while the northern part of the parish of Logie formed an enclave of Stirlingshire within the county.

Following the recommendations of the council boundary commission appointed under the Local Government (Scotland) Act 1889, Culross and Tulliallan were transferred to Fife, and the entire parish of Logie was included in Stirlingshire.

The coat of arms of the County of Perth appears to have been granted for use on the colours and standards of the volunteer and militia units of the county raised at the end of the eighteenth century. The Earl of Kinnoull, a native of Perthshire, and commanding officer of the Perthshire Gentlemen and Yeomanry Cavalry, was also Lord Lyon King of Arms at the time, and he presented the arms to the county in 1800. The grant document was discovered in the Lyon Office in 1890, and forwarded to the newly formed Perth County Council.

The shield is very similar to the Scottish royal arms, reflecting that Perthshire was the home county of the House of Dunkeld and contains the former royal capital, Scone. Further royal references are made on the canton, which shows Scone Palace surmounted by the Crown of Scotland. The crest is a Highland soldier, reflecting that the famous Black Watch were formed in the county. The supporters are an eagle and a warhorse, the former from the arms of the city of Perth.

By the 1890s the county contained the following burghs, which were largely outside the county council's jurisdiction:

The Local Government (Scotland) Act 1929 divided burghs into two classes from 1930: large burghs, which were to gain extra powers from the county council, and small burghs which lost many of their responsibilities.

Of the twelve burghs in Perthshire, only Perth was made a large burgh. There were ten small burghs: Blairgowrie and Rattray being united into a single burgh. In 1947 Pitlochry was created a small burgh. 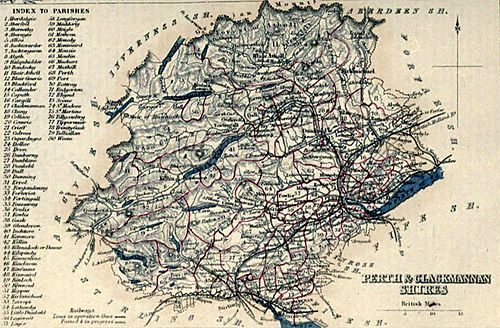 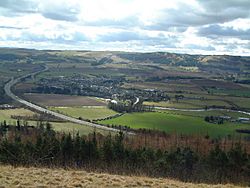 Bridge of Earn from Moncreiffe Hill

Perthshire includes the City of Perth and the following other towns and villages (see also Civil Parish list):

Other towns and villages

Some others listed in alphabetical order in the Land Register Counties :

In 1930 the landward area of the Local Government councils (the part outside of burgh boundaries) was divided into five districts, replacing the parish councils established in 1894: 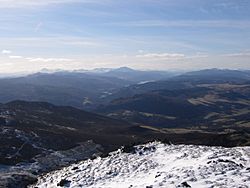 Most common surnames in Perthshire at the time of the United Kingdom Census of 1881, by order of incidence: 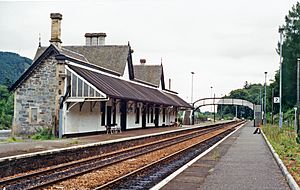 The Highland Main Line railway line connects Perth to Inverness, and in the far west the West Highland Line criss-crosses the Perthshire-Argyllshire boundary. Other lines in the south-east link Perth to the towns of Fife and Stirlingshire.

All content from Kiddle encyclopedia articles (including the article images and facts) can be freely used under Attribution-ShareAlike license, unless stated otherwise. Cite this article:
Perthshire Facts for Kids. Kiddle Encyclopedia.