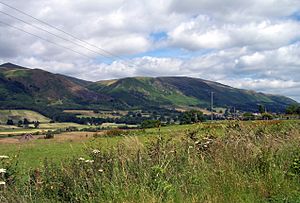 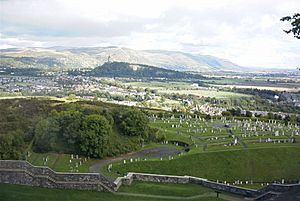 Ochil Hills viewed from Stirling Castle. The scarp face formed by the line of the Ochil Fault can be seen clearly. The Abbey Craig is in the middle distance.

The Ochil Hills ( Scottish Gaelic: Monadh Ochail is a range of hills in Scotland north of the Forth valley bordered by the towns of Stirling, Alloa, Kinross, Auchterarder and Perth. The only major roads crossing the hills pass through Glen Devon/Glen Eagles and Glenfarg, the latter now largely replaced except for local traffic by the M90 Edinburgh-Perth motorway cutting through the eastern foothills. The hills are part of a Devonian lava extrusion whose appearance today is largely due to the Ochil Fault which results in the southern face of the hills forming an escarpment. The plateau is undulating with no prominent peak, the highest point being Ben Cleuch at 721 m (2,365 ft). The south-flowing burns have cut deep ravines including Dollar Glen, Silver Glen and Alva Glen, often only passable with the aid of wooden walkways.

The extent of the Ochils is not well-defined but by some definitions continues to include the hills of north Fife.

Historically, the hills, combined with the town's site at the lowest bridging-point on the River Forth, led to Stirling's importance as a main gateway to the Highlands. They also acted as a boundary with Fife. Castle Campbell was built at the head of Dollar Glen in the late 15th century (an earlier castle on the site had been called "Castle Gloom") mainly as a very visible symbol of the Campbell domination of the area. Sheriffmuir, the site of the 1715 battle of the Jacobite rising, is on the northern slopes of the hills. In the early Industrial Revolution, several mill towns such as Tillicoultry, Alva and Menstrie (the Hillfoots Villages) grew up in the shadow of the Ochils to tap the water power. Some of the mills are open today as museums.

Blairdenon Hill was the site of one of the Beacons of Dissent during the G8 protests in July 2005.

The name Ochil, recorded as Okhel in the 13th Century, is of Pictish origin. The name may involve *ogel meaning, "a ridge". It is less likely that the name involves the adjective *uchel meaning "high, tall" (c.f. Welsh uchel).

The Ochils are formed from a thick wedge of Devonian age volcanic and volcano-sedimentary rocks, rising up from below the lower Old Red Sandstone sedimentary rocks to the north and terminated to the south by the major southerly downthrowing Ochil Fault.

The Ochil Volcanic Formation, a sub-unit of the Arbuthnott-Garvock Group, consists of basaltic andesite and trachyandesite lavas and related rock types erupted during the Early Devonian epoch. Parts of the lower slopes on the northern side around Blackford and Auchterarder are formed from a volcanic conglomerate. It is intruded by numerous dykes of micridiorite of Silurian/Devonian age which form a part of the North Britain Siluro-Devonian Calc-alkaline Dyke Suite. Intrusions of both mafic and felsic character are also found. The whole massif is heavily faulted with some valleys such as Alva Glen and Glen Sherup having been eroded along these lines. Glacial till covers much of the lower ground around and within the range and peat accumulations occur on the plateau surface particularly in the west.

Pictish folklore of the hills

Ancient folklore and historical documentation suggests that the Ochils once were inhabited by the Picts, or at least that a few Pictish settlements existed in the Ochil Hills. Castle Craig, a ruined ancient fort above the village of Mill Glen destroyed by industrial quarrying, was mentioned by local historian William Gibson in 1883 as being "a round Pictish fortress, the traces of which can still be distinctly seen."Old lore also told that some of the stones from the fort of Castle Craig were used in the construction of Stirling Castle, 7 3⁄4 miles (12.5 kilometres) to the west.

Another item of folklore existing in the Ochil Hills is Katie Thirsty's Well, a sacred well shrouded in mythology (OS Grid Reference – NS 81787 97653). Local historians have struggled to discover exactly the identity of "Katie Thirsty", but Pictish researcher Ronald Henderson argues that "the name derives from a corruption of both St. Katherine of Alexandria [Katie] and the Pictish King, Drust or Drustan [Thirsty]." He goes on to say "that the great crags of Dumyat less than a mile to the east is universally credited with being the last Pictish stronghold at the old hillfort there."

Windfarm in the Ochil Hills

An 18-turbine development, approved in June 2006, has been constructed at Green Knowes, south of Auchterarder, north of Glendevon about 400 m (1,300 ft) north of the Ben Thrush summit. Following approval in early 2007, the construction of a wind farm consisting of thirteen 102 m (335 ft) turbines on Burnfoot Hill, which lies north of Tillicoultry and Ben Cleuch and to the south of the Upper Glendevon Reservoir has been completed. The site consists of fifteen 2 MW and six 2.05 MW turbines with a tip height of 100 m (330 ft). The windfarm is owned and run by EDF Renewables, who support the work of the Ochils Mountain Rescue Team through the Burnfoot Hill Community Fund with an annual donation of £5,000 guaranteed till 2039. 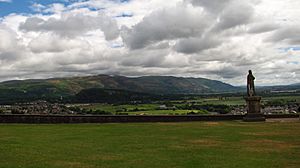 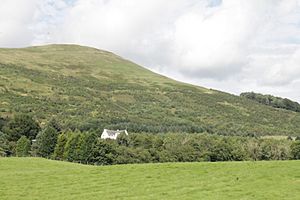 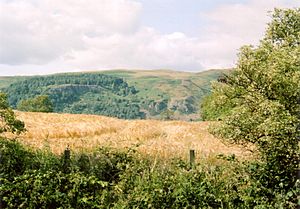 Ochil Hills viewed from Alloa road on the way to Tullibody.

In order of height.

Black Hill (North-West) near Sherrifmuir is marked on OS Maps as “Black Hill", but has no distinguishable peak or summit, more of a slop leading onto Glentye Hill. Marked as 350 metres.

Peat Hill, Lamb Hill, and Gled’s Nose are a selection of “hills” marked on OS Maps near NN 9768 0247. These hills have no distinguishable summit, disqualifying them as “peaks” in the Ochils, but rather they lead onto Glenquey Hill and Innerdownie respectively.

Berry Hill and The Shank (near NN 9591 0456) are marked as hills on OS maps, but fail to have distinguishable peaks. Rather, they lead onto the peak of Ben Shee.

All content from Kiddle encyclopedia articles (including the article images and facts) can be freely used under Attribution-ShareAlike license, unless stated otherwise. Cite this article:
Ochil Hills Facts for Kids. Kiddle Encyclopedia.