Kinross ( Scottish Gaelic: Ceann Rois) is a burgh in Perth and Kinross, Scotland, around 13 miles (21 kilometres) south of Perth and around 20 miles (32 kilometres) northwest of Edinburgh. It is the traditional county town of the historic county of Kinross-shire.

The Loch Leven Trails offers 21 km (13 miles) of walking and cycling heritage trail around the shoreline of Loch Leven. It begins at RSPB Vane Farm Nature Reserve via Findatie to Kinross Pier/Kirkgate Park.

There is a leisure centre located in Kinross, called Loch Leven Leisure.

Kinross Trout Fishery situated just on the edge of the village is one of Scotland's premier trout fishery giving fly and bait anglers the opportunity to catch some of Scotland largest trout.

Kinross Colts FC is a community football club and registered charity with over 400 boys, girls, men and women playing in 16 teams within the club. They have two grounds locally, The Myre at Smith Street in Kinross and Donaldson Park in Milnathort.

Kinross is also home to Kinross Rugby Club, who play their games at King George V ground alongside Kinross Hockey Club. Locally the ground is known as KGV.

The site of the original Pre-Reformation parish church and churchyard are located down a small wynd overlooking Loch Leven, a little away from the town. The church was dedicated to St. Serf and was under control of Dunfermline Abbey. Noteworthy ministers included John Colden from 1593 to 1640 and his son George Colden who served until 1665. The notorious Henry Christie was minister of Kinross 1679-89.

Rev Robert McGill served 1698 until 1726 and recorded supernatural events in the manse in 1718. Rev Robert Stark was initially unpopular but served 1732 to 1783. 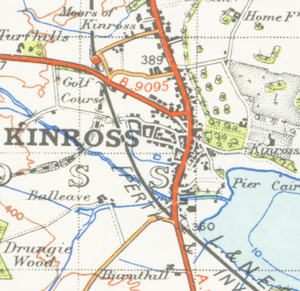 Kinross was originally linked by railway to Perthshire, Fife and Clackmannanshire until the rail links gradually disappeared. At one time three independent railway companies had their termini at the town. The Fife and Kinross Railway came from the east, the Kinross-shire Railway came from the south and The Devon Valley Railway came from the west. Kinross Junction railway station once stood on the line between Perth and Edinburgh, which was closed to make way for construction of the M90 motorway. Since this time, many people working within a commuting radius of Kinross have settled in the town owing to its central location and local amenities. Locals and Members of the Scottish Parliament (MSPs) have also asked the Scottish Government to publish a Feasibility Study into re-establishing the Perth–Edinburgh Direct Rail Link. As of 2021[update], no such document has been published.

Kinross is served by local and long distance bus services including Megabus services M90, M91 and M92 which call at the Sainsbury's Park & Ride site off Junction 6 of the M90 motorway.

All content from Kiddle encyclopedia articles (including the article images and facts) can be freely used under Attribution-ShareAlike license, unless stated otherwise. Cite this article:
Kinross Facts for Kids. Kiddle Encyclopedia.