Alloa (Received Pronunciation educated Scottish pronunciation /ˈaloʊa/; Scottish Gaelic: Alamhagh, possibly meaning "rock plain") is a town in Clackmannanshire in the Central Lowlands of Scotland. It is on the north bank of the Forth at the spot where some say it ceases to be the River Forth and becomes the Firth of Forth. Alloa is south of the Ochil Hills, 5.5 miles (8.9 km) east of Stirling and 7.9 miles (12.7 km) north of Falkirk; by water Alloa is 25 miles (40 km) from Granton.

The town, formerly a burgh of barony, is the administrative centre of Clackmannanshire Council. Historically, the economy relied heavily on trade between Glasgow and mainland Europe through its port. This became increasingly uncompetitive and the port stopped operating in 1970. The local economy is now centred on retail and leisure since the closure of major industries; only one brewer and one glassmaker survive today. Parochially, Alloa was linked with Tullibody. The towns are now distinct, albeit with Lornshill in the middle, and Alloa is about twice the size of its north-western neighbour. The population of Alloa was estimated to be approximately 20,730 residents in 2016. 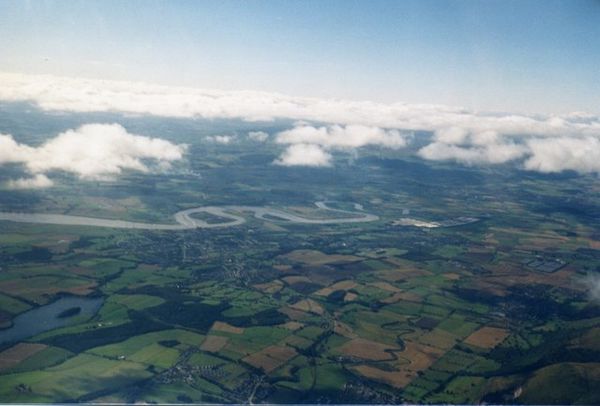 The Forth Valley near Alloa: Gartmorn Dam, Alloa Inch and Tullibody Inch can be seen on the Forth 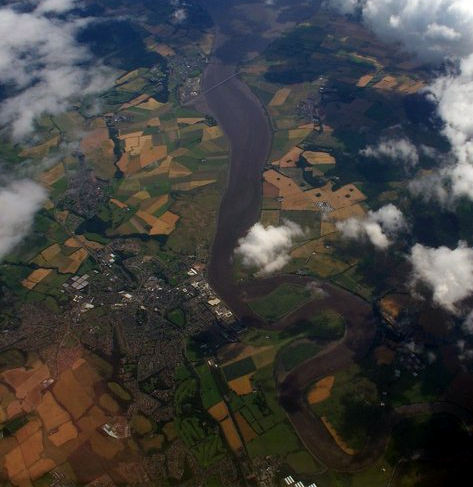 Alloa from the air

Sir Robert Erskine was granted the lands of Alloa and its environs in 1368 for services to King David II and he and his descendants were good stewards, developing the estates and innovating.

The Earl of Mar owned many of the coal mines, and Robert Bald, a local mining engineer, was contracted to provide water power from the Gartmorn Dam to operate the mines and other industries. Good water supplies and the availability of barley from the carselands encouraged George Younger to set up a brewery in the 1760s and he was soon followed by others. Alloa became one of Scotland's premier brewing centres.

Unfortunately, the 6th Earl of Mar, who oversaw many far-reaching developments including substantial harbour improvements, a customs house and the building of the Gartmorn Dam, was forced to flee the country and forfeit his lands after disastrously backing the Jacobite cause in 1715. However, his brother was allowed to purchase the forfeited lands and future generations continued the tradition of creative industry by launching a glass-works in 1750 and laying one of Scotland's earliest railways (a waggonway) from the Sauchie mines to down to the harbour in around 1766.

Before 1775, the colliers were attached to the properties in which they were born and were virtual serfs or slaves, supported by the master. After an Act of Parliament which abolished the system, the colliers could move between collieries at will, and they were supported in their needs by the Alloa Colliers' Fund or Friendly Society which was founded in 1775.

Traces of the waggonway and the Gartmorn Dam can still be seen today, and although the dam is no longer used for energy production or water supply, it is well used for fishing and leisure purposes. The Clackmannashire Library was founded at Alloa in 1797 and it contained upwards of 1500 volumes.

After the improvements were made to the harbour during the 18th century, Alloa thrived as a river port through which the products of Glasgow manufacture were exported to continental Europe. At that time, and until the 1950s, the main industry to the north and east of the town was coal mining.

Wool was also locally plentiful and in the early part of the 19th century, John Paton set up a small yarn-spinning business in the town, later establishing Kilncraigs Mill. His firm merged with J. & J. Baldwin of Halifax in 1924 to become the world-famous Paton & Baldwins Ltd. 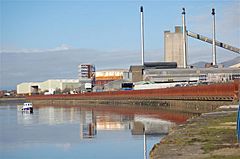 The town itself continued to be known for its weaving and glassmaking industries well into the 19th and early 20th centuries.

Alloa was long associated with the brewing industry, with at least nine major breweries producing ales at its height. However industrial decline during the late 20th century has led to the economy relying more on retail and leisure. The first brewing firms in the town were Younger in 1762 and Meiklejohn in 1784. Alloa ale was sent to London and George Younger had an extensive export trade to the West Indies, Egypt and the Far East. Alloa was also home to Alloa Brewery Co developing "Graham’s Golden Lager" in 1927 which was renamed "Skol" in the 1950s. Closures and mergers during the mid-20th century reduced the number of breweries to two and by 1999 only one remained, The Forth Brewery which became Williams Bros. in 2003.

In addition to the brewing of beer, Alloa is the site of the former Carsebridge Distillery. According to Alfred Barnard, the Victorian historian of British distilling and brewing, the distillery was founded as a malt distillery by John Bald in 1799. In the 1840s it was converted into a grain distillery and by the time of Barnard's visit in the mid 1880s the distillery covered 10 acres, employed 150 people, and had an annual output of 1.4 to 1.7 million gallons of pure grain whisky. The distillery's owner John Bald and Co was one of five companies that combined to form the Distillers Company Limited in 1877. In 1902, a fire devastated the distillery, after World War I it was refitted and started producing yeast. This yeast production lasted until 1938. In 1956 the distillery was modernised, it expanded in 1966 and in the 1970s a new still house, cooperage and animal feedstuffs plant added. By 1980 the Carsebridge Distillery was the largest grain distillery in Scotland, however it closed in 1983 and was demolished in 1992. One of the distillery's Coffey stills is now in use at the Cameronbridge distillery.

After whisky ceased to be produced at Carsebridge, the cooperage remained as one of two owned by Diageo in Scotland. In 2008, 30 people worked there rebuilding or repairing up to 400 bourbon casks, imported from the US, each day. However, in 2009 the company announced that it intended to close the Carsebridge Cooperage and move the work to nearby Cambus. The new Cambus cooperage was opened in December 2011 by the Earl of Wessex.

Alloa is linked to the historic Argyll and Sutherland Highlanders housed at Stirling Castle. Many of the soldiers in WW2 fought under Montgomery at the Battle of El Alamein and Wadi Akrit where their commanding officer Lorne Campbell won a V.C. They were part of the 7th Argylls under the 51st Highland Division.

As of 2014, the temporary national headquarters of Police Scotland is located in Alloa.

Towns and villages near to Alloa include Alva, Tillicoultry, Dollar, Rumbling Bridge, Culross and Falkirk.

Alloa's most famous landmark is the 15th century Alloa Tower (National Trust for Scotland), the surviving part of the ancestral medieval residence of the Erskine family, the Earls of Mar. 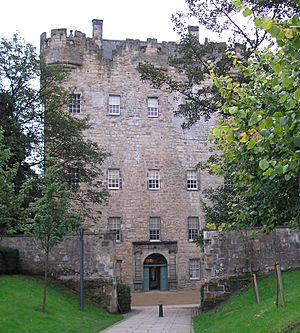 Despite extensive alterations both externally and internally, the Tower retains its original medieval wooden roof and battlements, as well as some internal features. It is one of the largest and earliest of Scottish tower houses.

The town formerly contained a large number of 17th and 18th century buildings, but most were cleared away as 'slums' in the 18th to 19th century. However, Alloa does retain some historic architecture in the form of Alloa Tower, Tobias Bauchop's House (1695), Inglewood House, Gean House and Greenfield House.

Alloa Town Hall and Library was designed by the architect Alfred Waterhouse and built in 1886-9 at a cost of £18,008.

Alloa War Memorial (1925) is by Sir Robert Lorimer with sculpture by Pilkington Jackson.

After the closure of the Stirling-Alloa-Dunfermline line in 1968 and the Devon Valley Railway in 1973, the town had no passenger railway services for 40 years until 2008. The Stirling-Alloa-Kincardine rail link project was completed in May 2008. The laying of new track had commenced in September 2006 after much preparatory work, including new drainage works and the grouting of a large number of shallow mine workings. The project also involved the construction of a new bypass road, and a bridge which replaced a level crossing in the town. Alloa railway station reopened in May 2008, a short distance east of its former site, just beyond the location of the former junction to the Devon Valley line that served Tillicoultry and Dollar, and also carried through trains to Kinross and Perth. 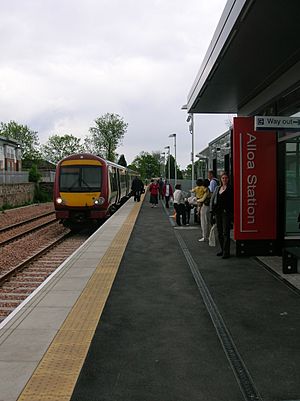 Alloa station on the day of opening in May 2008, 40 years after it closed

ScotRail now operates an hourly service from Alloa railway station to Glasgow Queen Street via Stirling, Larbert and Lenzie between 0641 and 2241 Monday to Saturday and between 1041 and 2141 on Sundays. Passengers can travel to Inverness, Edinburgh Waverley and Aberdeen with a change at Stirling, however for journeys to or from Edinburgh passengers with heavy luggage may find it more convenient to change at Larbert, where Edinburgh and Glasgow services use the same platform.

The new railway opened for traincrew route learning in early April 2008, followed by the opening to the public on Monday 19 May 2008. This had been preceded by an official opening on 15 May 2008, where LNER Gresley K4 61994 The Great Marquess hauled four specials to Stirling. The return workings were hauled by Deltic 55022 Royal Scots Grey. Transport Minister Stewart Stevenson officially reopened the line.

There are churches of other denominations in the town, including Baptist Church, a Catholic church also named St Mungo's and St John's Episcopal Church. There are also congregations of Latter-day Saints and Jehovah's Witnesses in Alloa.

The headquarters of Action of Churches Together in Scotland (ACTS), the ecumenical organisation linking Scotland's largest churches, is located at Inglewood House, Alloa.

There is a Musalla on Whins Road in alloa. From here, Muslims who are unable to attend a Mosque can use this space as a place of Prayer, Worship and Education. In 2003 it became open to the public.

Alloa is home to one professional football club: Alloa Athletic Football Club. The club was formed in 1878 under the name of Clackmannan County but changed to its present-day name of Alloa Athletic in 1883. The team currently play in the Scottish Championship, formerly the Scottish Football League First Division, after being promoted as winners of a play-off with Dunfermline Athletic, the season after being crowned champions of the Scottish Football League Third Division at the end of the 2011–12 season. Their home games are played at Recreation Park in Alloa.

All content from Kiddle encyclopedia articles (including the article images and facts) can be freely used under Attribution-ShareAlike license, unless stated otherwise. Cite this article:
Alloa Facts for Kids. Kiddle Encyclopedia.