Dollar (Scottish Gaelic: Dolair) is a small town in Clackmannanshire, Scotland. It is one of the Hillfoots Villages, situated between the Ochil Hills range to the north and the River Devon to the south. Dollar is on the A91 road, which runs from Stirling to St Andrews. The town is around 3 miles east of Tillicoultry. The parish of Muckhart extends right up to the eastern edge of Dollar, despite Muckhart's much smaller size. This encompassed Dollar Mine and Pitgober.

The major attraction in Dollar is the 500-year-old Castle Campbell, lowland seat of the Duke of Argyll, where Mary, Queen of Scots once lived in the 16th century. The residence was chosen for its proximity to the court in Edinburgh and to Clackmannan Tower, Alloa, Stirling Castle and Linlithgow Palace.

The walk to the castle is a vigorous ascent by a spectacular series of paths, bridges and walkways in the deep gorges of the glen and its tributaries. Unfortunately, the most spectacular section has had to be closed due to the risk of landslip (a part of which was re-opened Summer 2007), but alternative routes are available. There is also a road to the castle, accessible by car, for the less energetic. 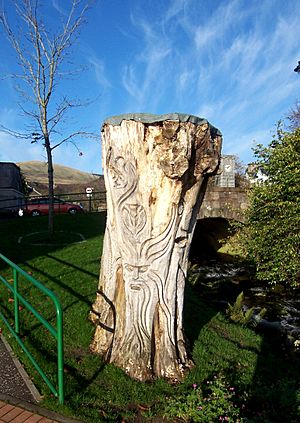 A carved trunk near the burn

At the foot of Dollar Glen is The Mill Green. Here there is also a small museum run by volunteers, which contains a collection of local items, and much information about the former Devon Valley Railway, which closed to passengers in 1964. There are various sports facilities, including an 18-hole golf course (notable for its steep inclines and lack of bunkers), a tennis club, a squash club, a bowling club, and a cricket club. The Ochil Hills that overlook Dollar provide opportunities for mountain biking. The nearby River Devon is used seasonally for trout fishing (by permit). There are three churches, one Church of Scotland, one Scottish Episcopal Church and Ochil Hills Community Church which meets in the Civic Centre.

Dollar is now mainly residential; however, for a long time it was known for its industries. Attempts were made to mine lead and copper in Dollar Glen from the 18th century and possibly earlier, but these were of no economic significance. Coal mining in the area began around the same time and, until 1973, supplied the Kincardine Power Station, and later, the Longannet Power Station with coal from the Upper Hirst seam. A tiny private non-NCB coal mine operated from the Harviestoun estate from the mid-1970s, partly filling the gap that the closed NCB left, whilst there was still local demand for coal. 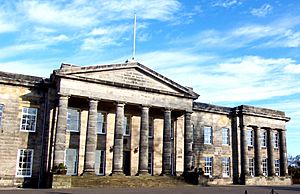 In common with the other Hillfoots Villages, the textiles industry played an important part in the town's development. The Harviestoun Brewery was established west of Dollar in 1985, before its move to Alva. The town is now largely a dormitory community for people who work in Stirling and further afield — e.g. Glasgow and Edinburgh. Because of the success of its fee-paying school Dollar Academy and its tranquil environment, the town draws young and reasonably well-off families, giving it a slightly different character from the other Hillfoots Villages. 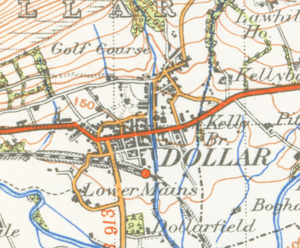 The town has two war memorials, one for each world war. In the grounds of the Academy a bronze figure with outstretched hands faces westwards and commemorates the fallen of the First World War. This also has names added for Northern Ireland. The dead were largely from the Academy; two non-Academy deaths (the Archibald brothers) are indicated by the word "parish" against their names. The Second World War has a far more modest memorial, in the small public garden on the main road, where the road suddenly twists. Both memorials are by local sculptor George Henry Paulin.

Dollar is home of the Dollar Glen Football Club.

Dollar is twinned with the French town of La Ville-aux-Dames, which lies just outside Tours in the Loire Valley.

Possible interpretations are that Dollar is derived from Doilleir, an Irish and Scots Gaelic word meaning dark and gloomy, or from various words in Pictish: 'Dol' (field) + 'Ar' (arable) or Dol (valley) + Ar (high). Another derivation is from Dolar, ‘haugh place’ (cf Welsh dôl ‘meadow’. This word was borrowed from British or Pictish into Scottish Gaelic as dail ‘water-meadow, haugh’). John Everett-Heath, in derives it as 'Place of the Water Meadow' from the Celtic dôl 'water meadow' and ar 'place'.

All content from Kiddle encyclopedia articles (including the article images and facts) can be freely used under Attribution-ShareAlike license, unless stated otherwise. Cite this article:
Dollar, Clackmannanshire Facts for Kids. Kiddle Encyclopedia.