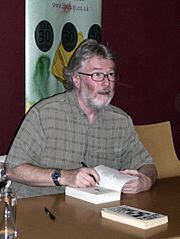 Iain Menzies Banks (16 February 1954 – 9 June 2013) was a Scottish writer. He wrote fiction under the name Iain Banks. When he wrote science fiction books he wrote his name as Iain M. Banks. He was known for his book The Wasp Factory.

Banks was born on 16 February 1954 in Dunfermline, Fife, Scotland. He studied at University of Stirling. Banks was married to Annie Banks from 1992 until they separated in 2007. Then he was married to Adele Hartley from March 2013 until his death. He had no children. Banks died on 9 June 2013 from gallbladder cancer after being diagnosed in early April. He was 59 years old.

All content from Kiddle encyclopedia articles (including the article images and facts) can be freely used under Attribution-ShareAlike license, unless stated otherwise. Cite this article:
Iain Banks Facts for Kids. Kiddle Encyclopedia.