Dunsinane Hill (/dʌnˈsɪnən/ dun-SIN-ən) is a hill of the Sidlaw Range near the village of Collace in Perthshire, Scotland. It is mentioned in Shakespeare's play Macbeth, in which Macbeth is informed by a supernatural being, "Macbeth shall never vanquished be, until Great Birnam wood to high Dunsinane hill Shall come against him."

The hill has a height of 310 metres (1,020 ft) and commands expansive views of the surrounding countryside. It consists of a late Iron Age hill fort, the ramparts of which remain obvious. The site was damaged by undocumented amateur excavations in the 19th century by antiquarians attracted to the site by its Shakespearean connection. Little of value was learned about the history of the monument from these unscientific endeavours.

Dunsinane is the traditional site of a 1054 battle in which Siward, Earl of Northumbria defeated Macbeth of Scotland. The much earlier Iron Age hill fort has long been known as Macbeth's Castle, though there is no archaeological evidence that it was in use by him or anyone during the mid eleventh century.

An alternative spelling of the name is Dunsinnan. The derivation is Gaelic, "the hill of ants"; possibly a reference to the large number of people it took to build the fortress. 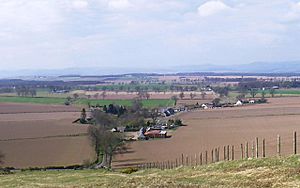 The village of Collace from Dunsinane Hill

The best access to Dunsinane Hill is from the rear of the Perthshire village of Collace on the northern side of Dunsinane Hill, between the village and the quarry. There is a small parking area there suitable for 4 or 5 cars, from which a steep, but clearly defined path leads directly to the summit.

All content from Kiddle encyclopedia articles (including the article images and facts) can be freely used under Attribution-ShareAlike license, unless stated otherwise. Cite this article:
Dunsinane Hill Facts for Kids. Kiddle Encyclopedia.