Loch Sunart (Scottish Gaelic Loch Shuaineart) is a sea loch on the west coast of Scotland. Loch Sunart is bounded to the north by the Sunart district of Ardnamurchan and to the south by the Morvern district. At 31 kilometres (19 mi) it is the longest sea loch in the Highland local government area. The maximum depth of the loch is 124 metres east of Càrna near the entrance to Loch Teacuis. Other islands in the loch include Oronsay, seaward of Càrna, Risga, which lies between the two larger islands, and Eilean Mòr, which lies towards the landward end of the loch in line with Beinn Resipol. 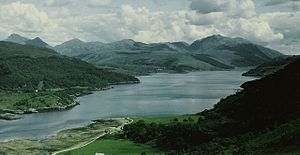 A considerable part of the loch is leased for aquaculture, with fish farming, originally only of salmon but now somewhat diversified, being established in the 1980s.

A local legend holds that the absence of resident swans in Loch Sunart is the result of a doomed love affair between a Celtic chieftain and a local girl. When his mother, who opposed a marriage, turned her into a swan to thwart their love, the young man accidentally killed the swan while hunting. On learning of the swan's real identity he killed himself to join the swan at the bottom of the loch, which swans supposedly have shunned ever since.

In 2014 the entire loch (an area of 4,900 hectares (49 km2)) was declared a Nature Conservation Marine Protected Area (NCMPA), to protect features including flame shell beds and Leptometra celtica population. Serpulid beds are also present here, as are organisms such as sponges, starfish and brittlestars. The MPA is designated a Category IV protected area by the International Union for Conservation of Nature. Within the MPA the use of fishing gear is generally prohibited, although creeling is permitted in certain parts of the loch.

The loch also forms part of a larger (74,100 hectares (741 km2)) NCMPA, entitled Loch Sunart to the Sound of Jura, which extends to include the Sound of Mull, the Firth of Lorne and the Sound of Jura. This MPA has been designated to protect the population of common skate and the area's quaternary geological features.

All content from Kiddle encyclopedia articles (including the article images and facts) can be freely used under Attribution-ShareAlike license, unless stated otherwise. Cite this article:
Loch Sunart Facts for Kids. Kiddle Encyclopedia.