Sound of Jura facts for kids 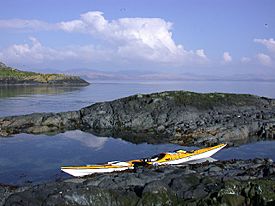 Small group of skerries in the Sound of Jura, looking Northwest towards Jura.

The Sound of Jura (Scottish Gaelic: An Linne Rosach) is a strait in Argyll and Bute, Scotland. It is one of the several Sounds of Scotland.

It is to the east of the island of Jura and to the west of Knapdale, part of a peninsula of the Scottish mainland. The Crinan Canal's west exit is also in the Sound of Jura. Lochs that lead to the sound include Loch Sween, and Loch Caolisport.

The north end is particularly treacherous, being filled with skerries, small islands, strong tidal currents and whirlpools. The Gulf of Corryvreckan, which contains a notorious whirlpool, the world's third largest, leads from the north of the sound.

The south end, in contrast, is much wider and more open; most of the small islands and reefs are close into shore. The ferries to Colonsay and Islay from the mainland skirt the southern end of the sound.

Most of Jura's small population lives on the east coast, overlooking the sound, and amongst these would have been George Orwell when he was writing his novel Nineteen Eighty-Four

It is not to be confused with the Sound of Islay, which lies between Jura and Islay.

All content from Kiddle encyclopedia articles (including the article images and facts) can be freely used under Attribution-ShareAlike license, unless stated otherwise. Cite this article:
Sound of Jura Facts for Kids. Kiddle Encyclopedia.