Kids Encyclopedia Facts
For other places with the same name, see Sanday (disambiguation).

Sanday (Scottish Gaelic: Sandaigh) is one of the Small Isles, in the Scottish Inner Hebrides. It is a tidal island linked to its larger neighbour, Canna, via sandbanks at low tide, and also connected to the larger island by a bridge. Canna and Sanday form a single community, and are usually described as Canna.

Panorama taken from Compass Hill on Canna, overlooking Canna Bay and Sanday, the island of Rùm in the distance. 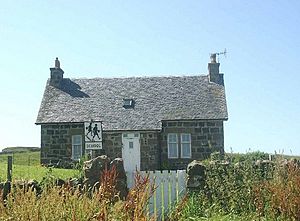 Like its neighbour, Canna, the whole island is owned by the National Trust for Scotland (NTS), and is part of the Lochaber committee area of Highland Council. Whereas Canna is run by the NTS as a single farm, parts of Sanday are used for crofting.

A small primary school on Sanday serves the communities of both islands, and currently (2009) has four pupils, of whom two are the children of the teacher. A footbridge to the island was built in 1905 to allow pupils from Canna to reach the school regardless of the state of the tide. This bridge was destroyed by storms in 2005, and has been replaced by a road bridge which was completed in April 2006. This new bridge allows vehicular access at all tide levels between the two islands, although parts of the road on Sanday is still covered by water during high tides.

From the mainland the island can be reached by the Caledonian MacBrayne ferry system from the port of Mallaig. Sanday includes rocks that are geologically part of the Paleocene and Eocene British Tertiary Volcanic Province, among some of the youngest rocks found in Scotland.

The largest and most conspicuous building on Sanday is the deconsecrated Catholic church of St Edward, which stands alone on an elevated part of the island, away from the cottages which, together with the school, cluster around the bay facing Canna. The church, which is also owned by the National Trust for Scotland, was restored and converted into a hostel and Study Centre by the Hebridean Trust. This project was undertaken at the invitation of the owners. The Centre is linked to the Archive of Gaelic language and culture that was created by the former owner of Canna and Sanday, the late John Lorne Campbell. It was successfully completed and opened in 2001 by HRH The Princess Royal. Subsequently, there was water ingress, which caused damage to the interior. This challenge is in the hands of the National Trust for Scotland.

All content from Kiddle encyclopedia articles (including the article images and facts) can be freely used under Attribution-ShareAlike license, unless stated otherwise. Cite this article:
Sanday, Inner Hebrides Facts for Kids. Kiddle Encyclopedia.