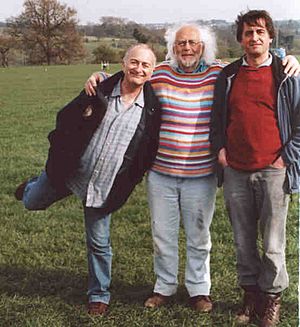 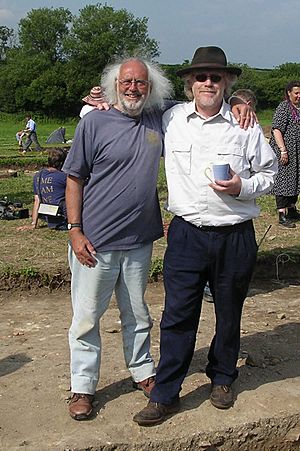 Aston with producer Tim Taylor in 2005 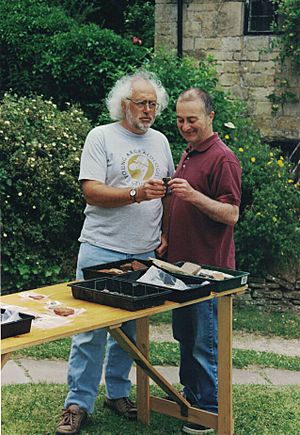 Time Team is a British television programme that originally aired on Channel 4 from 16 January 1994 to 7 September 2014. Created by television producer Tim Taylor and presented by actor Tony Robinson, each episode featured a team of specialists carrying out an archaeological dig over a period of three days, with Robinson explaining the process in lay terms. The specialists changed throughout the programme's run, although it consistently included professional archaeologists such as Mick Aston, Carenza Lewis, Francis Pryor and Phil Harding. The sites excavated ranged in date from the Palaeolithic to the Second World War.

In October 2012, Channel 4 announced that the final series would be broadcast in 2013. Series 20 was screened from January–March 2013 and nine specials were screened between May 2013 and September 2014.

At the start of the programme, Tony Robinson explains, in an opening "piece to camera", the reasons for the team's visit to the site and during the dig, he enthusiastically encourages the archaeologists to explain their decisions, discoveries and conclusions. He tries to ensure that everything is comprehensible to the archaeologically uninitiated. The site is frequently suggested by a member of the viewing public. Time Team uncover as much as they can of the archaeology and history of the site in three days.

Excavations are not just carried out to entertain viewers. Robinson claims that the archaeologists involved with Time Team have published more scientific papers on excavations carried out in the programme than all British university archaeology departments over the same period and that by 2013, the programme had become the biggest funder of field archaeology in the country.

A team of archaeologists, usually led by Mick Aston or Francis Pryor (the latter usually heading Bronze Age and Iron Age digs), including field archaeologist Phil Harding, congregate at a site, usually in Britain. The original Time Team line-up from 1994 has altered over the years. Historian Robin Bush was a regular in the first nine series, having been involved with the programme through his long friendship with Aston. Architectural historian Beric Morley featured in ten episodes between 1995 and 2002. In 2005, Carenza Lewis left to pursue other interests. She was replaced by Helen Geake, Anglo-Saxon specialist. The regular team also included: Stewart Ainsworth, landscape investigator; John Gater and Chris Gaffney, archaeological geophysicists; Henry Chapman, surveyor; Victor Ambrus, illustrator; and Robin Bush, archivist

The team was supplemented by experts appropriate for the period and type of site. Guy de la Bédoyère has often been present for Roman digs, as well as those involving the Second World War such as D-Day and aircraft (such as the Spitfire). Architectural historian Jonathan Foyle has appeared in episodes relating to excavations of country estates. Paul Blinkhorn (pottery), Mark Corney (coins) and Jackie McKinley (bones) have appeared from time to time. Mick ‘the dig’ Worthington, an excavator in the early series, occasionally returned as a dendrochronologist, whereupon he was dubbed 'Mick the twig'. Margaret Cox often assisted with forensic archaeology, mainly between 1998 and 2005. Other specialists who appeared from time to time include historian Bettany Hughes, archaeologist Gustav Milne, East of England specialist Ben Robinson and David S. Neal, expert on Roman mosaics. Local historians also joined in when appropriate.

In February 2012, it was announced that Aston had quit the show due to format changes. The disputed changes included hiring anthropologist Mary-Ann Ochota as a co-presenter, dispensing with other archaeologists and what he thought were plans to "cut down the informative stuff about the archaeology". "The time had come to leave. I never made any money out of it, but a lot of my soul went into it. I feel really, really angry about it." he told British Archaeology magazine. Time Team producer Tim Taylor released a statement in response to the news reports saying "His concerns are of great importance to me. We have addressed some of them" and that "you’ve not heard the last of Mick on Time Team".

Time Team developed from an earlier Channel 4 programme, Time Signs, first broadcast in 1991. Produced by Taylor, Time Signs had featured Aston and Harding, who went on to appear on Time Team. Following that show's cancellation, Taylor went on to develop a more attractive format, producing the idea for Time Team, which Channel 4 also picked up, broadcasting the first series in 1994. Time Team has had many companion shows during its run, including Time Team Extra (1998), History Hunters (1998–1999) and Time Team Digs (1997–2006), whilst several spin-off books have been published. The programme features special episodes, often documentaries on history or archaeology and live episodes. Time Team America, a US version of the programme, was broadcast on PBS in 2009 and co-produced by Oregon Public Broadcasting and Videotext/C4i. The programme has been exported to 35 other countries.

Time Team was commissioned by Channel 4 Television (the broadcaster) and made in partnership between VideoText Communications Ltd and Picturehouse Television Co. Ltd (based in London). Recently formed Wildfire Television was involved in the production of The Big Roman Dig (2005) and The Big Royal Dig (2006). It was produced by Taylor, the show's originator, with Robinson as associate producer.

On 13 September 2007, during the filming of a jousting reenactment for a special episode of Time Team, a splinter from a balsa wood lance went through the eye-slit in the helmet of one of the participants and entered his eye socket. 54-year-old Paul Anthony Allen, a member of a re-enactment society, died a week later in hospital. Channel 4 stated that the programme would be shown, but without the re-enactment sequence. The episode, dedicated to Allen, was transmitted on 25 February 2008.

In 2012, Aston announced he was leaving the show after criticising format changes that focused less on archaeological activities. Channel 4 subsequently announced that the final Time Team series would be broadcast in 2013. Viewing figures had been in decline from 2.5 million in 2008 to 1.5 million in November 2011. In October 2013, Robinson said in an interview with Radio Times that he believed Time Team still had life in it and suggested that after a three- or four-year absence it could make a return. He also expressed support for a fan-organised Facebook campaign to bring the Time Team crew together again to carry out a dig in memory of Aston, who died suddenly on 24 June 2013. The regular Time Team programme ended on 24 March 2013; the final Time Team special aired on 7 September 2014.

Time Team's Big Dig was an expansion on the live format. A weekend of live broadcasts in June 2003 was preceded by a week of daily short programmes. It involved about a thousand members of the public in excavating test pits each one metre square by fifty centimetres deep. Most of these pits were in private gardens and the project stirred up controversies about approaches to public archaeology.

Time Team's Big Roman Dig (2005) saw this format altered, in an attempt to avoid previous controversies, through the coverage of nine archaeological sites around the UK which were already under investigation by professional archaeologists. Time Team covered the action through live link-ups based at a Roman Villa at Dinnington in Somerset - itself a Time Team excavation from 2003. Over 60 other professionally supervised excavations were supported by Time Team and carried out around the country in association with the programme. A further hundred activities relating to Roman history were carried out by schools and other institutions around the UK.

Time Team Specials are documentary programmes about topics in history and archaeology made by the same production company. They are generally presented by Robinson and often feature one or more of the familiar faces from the regular programme of Time Team. In some cases the programme makers have followed the process of discovery at a large commercial or research excavation by another body, such as that to commemorate the 90th anniversary of the ending of the First World War at the Vampire dugout in Belgium. Time Team usually does not carry out excavations for these programmes, but may contribute a reconstruction.

Time Team History of Britain saw Robinson and the team document everything they have learned up to now and show a history of Britain. Behind the Scenes of Time Team showed meetings of the archaeologists, and material not transmitted during the episode of the dig. 10 Years of Time Team presented a round-up of what has happened in Time Team over the past 10 years and what they expect to happen in the future.

Time Team has been credited with promoting archaeology in the UK. In a 2008 report produced by English Heritage, a working group of Palaeolithic specialists recognised the importance of the show in "promoting public awareness" of Palaeolithic Britain, something which they argued was to be encouraged.

All content from Kiddle encyclopedia articles (including the article images and facts) can be freely used under Attribution-ShareAlike license, unless stated otherwise. Cite this article:
Time Team Facts for Kids. Kiddle Encyclopedia.