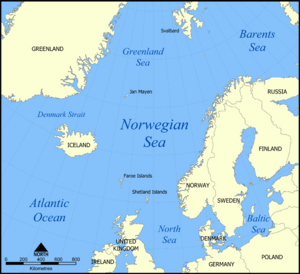 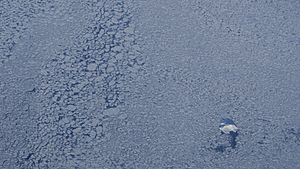 The Denmark Strait or Greenland Strait is an oceanic strait between Greenland (to its northwest) and Iceland (to its southeast). The Norwegian island of Jan Mayen is northeast of the strait.

It connects the Greenland Sea, an extension of the Arctic Ocean, to the Irminger Sea, a part of the Atlantic Ocean. It is 300 miles (480 km) long and 180 miles (290 km) miles wide at its narrowest.

During World War II, the Battle of the Denmark Strait took place on 24 May 1941.

It is the widest strait of the world found in the American continent.

All content from Kiddle encyclopedia articles (including the article images and facts) can be freely used under Attribution-ShareAlike license, unless stated otherwise. Cite this article:
Denmark Strait Facts for Kids. Kiddle Encyclopedia.