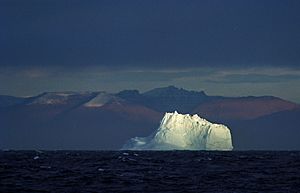 The sea has an Arctic climate with regular northern winds and temperatures rarely rising above 0 °C. The West Ice forms in winter in the Greenland Sea, north of Iceland, between Greenland and Jan Mayen island. It is a major breeding ground of harp seal and hooded seal. It has been used for seal hunting for more than 200 years.

Major islands of the Greenland Sea include Svalbard archipelago, Edvards, Eila, Godfred Hansens, Île-de-France, Jan Mayen Lynns, Norske and Schnauders. Of those, only the Svalbard islands are lived on, and Jan Mayen has only seasonal military staff.

The Greenland Sea is has many of the organisms that form the base of the oceanic food chain. Large invertebrates, fish (such as cod, herring, redfish, halibut, and plaice), birds and mammals (including various species of seals, whales, and dolphins) all feed on the smaller invertebrates and small organisms. Mosses, lichens, and scanty bushes around the coasts serve as food to the deer and musk oxen, which in turn are hunted by the polar bear.

All content from Kiddle encyclopedia articles (including the article images and facts) can be freely used under Attribution-ShareAlike license, unless stated otherwise. Cite this article:
Greenland Sea Facts for Kids. Kiddle Encyclopedia.