The hooded seal (Cystophora cristata) is an arctic pinniped. It is found only in the central and western North Atlantic. It ranges from Svalbard in the east to the Gulf of St. Lawrence in the west.

The male has a peculiar inflatable bladder on the head. This bladder hangs between his eyes and down over his upper lip in the deflated state. In addition, he can inflate a large balloon-like sac from one of his nostrils. The bulge develops when the seal is four years old. The male can blow up this bulge, so that it is the size of its head. 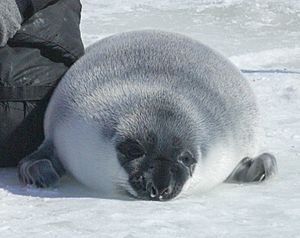 Hooded seal pup (next to researcher) on ice in the Gulf of St. Lawrence

Pups are about 1 metre (3 ft 3 in) long at birth and weigh about 24 kilograms (53 lb). They are born on the ice from mid-March to early April. They are born with a slate blue-grey coat with a pale cream color on the belly. They moult after about 14 months. Nursing of the pup lasts for an average of only 4 days. This is the shortest lactation period of any mammal. During the 4 days the pup doubles in size, gaining around 7 kg/day. This is possible because the milk that they drink has a fat content of 60%. The female pup will mature between ages 3 and 6. The male pup will mature between ages 5 and 7.

All content from Kiddle encyclopedia articles (including the article images and facts) can be freely used under Attribution-ShareAlike license, unless stated otherwise. Cite this article:
Hooded seal Facts for Kids. Kiddle Encyclopedia.