Betula nana, the dwarf birch, is a species of birch in the family Betulaceae, found mainly in the tundra of the Arctic region. 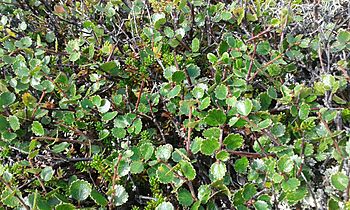 It is a monoecious shrub growing up to 1–1.2 metres (3 ft 3 in–3 ft 11 in) high. The bark is non-peeling and shiny red-copper colored. The leaves are rounded, 6–20 millimetres (0.24–0.79 in) diameter, with a bluntly toothed margin. The leaves are a darker green on their upper surface. Leaf growth occurs after snow melt and become red in autumn.

Betula nana is native to arctic and cool temperate regions of Greenland, Iceland, northern Europe, northern Asia and northern North America and it will grow in a variety of conditions. Outside of far northern areas, it is usually found growing only in mountains above 300 metres (980 ft), up to 835 metres (2,740 ft) in Scotland and 2,200 metres (7,200 ft) in the Alps. Its northern range limit is on Svalbard, where it is confined to warm sites. In the UK Betula nana is at its southern range limit, with many populations having declined significantly in recent decades. In southern Sweden the occurrence of Betula nana in Sund, Ydre is deemed a glacial relict.

In general, it favors wet but well-drained sites with a nutrient-poor, acidic soil which can be xeric and rocky. B. nana has a low tolerance for shade.

The genome of B. nana has been sequenced.

All content from Kiddle encyclopedia articles (including the article images and facts) can be freely used under Attribution-ShareAlike license, unless stated otherwise. Cite this article:
Dwarf birch Facts for Kids. Kiddle Encyclopedia.