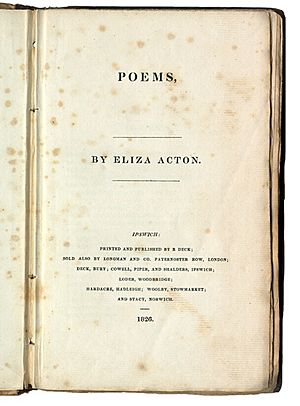 Elizabeth "Eliza" Acton (17 April 1799 – 13 February 1859) was an English poet and cook. She was born in Battle, Sussex and raised in Suffolk. She wrote one the first cookbooks for cooking at home, not for professional cook or chef, Modern Cookery for Private Families. In this book she started the use of listing the ingredients and suggested cooking times with each recipe, like all the world does now. Modern Cookery was sold for a long time after her death, until 1914 and can still be found at many libraries. Her recipes are still very famous.

All content from Kiddle encyclopedia articles (including the article images and facts) can be freely used under Attribution-ShareAlike license, unless stated otherwise. Cite this article:
Eliza Acton Facts for Kids. Kiddle Encyclopedia.