St John-at-Hampstead is a Church of England parish church dedicated to St John the Evangelist (though the original dedication was only refined from St John to this in 1917 by the Bishop of London) in Church Row, Hampstead, London. 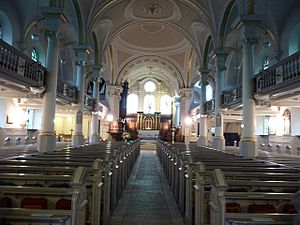 The interior of St John at Hampstead

Hampstead was granted to the Benedictine monks of Westminster Abbey by charter in 986. It is likely that they placed a church there soon afterwards, but the first records of one come from 1312 (when it was recorded that John de Neuport was its priest) and 1333 (through a mention of a Chapel dedicated to the Blessed Virgin Mary). On the Dissolution of the Monasteries, the Abbey was replaced by the Bishop of Westminster, with its first and only holder Thomas Thirlby also serving as St John's rector. Thirlby appointed Thomas Chapelyne to be St John's vicar in 1545, but the see was abolished in 1551 by Edward VI, with the manor and benefice of Hampstead being granted to Sir Thomas Wrothe. The church of this era was part in stone and part in timber, and also had a minor wooden tower.

As Hampstead grew in popularity and size as an out-of-town health resort, the small existing church grew less and less adequate and derelict, being finally declared unusable by 1744. A new church was built on designs by Henry Flitcroft and John Sanderson, and dedicated on 8 October 1747 by the Bishop of Llandaff (as commissary of the Diocesan). However, by 1827 this was again too small, though initial plans by Lewis Vulliamy were rejected as too expensive and it took until 1843 for extension plans by Robert Hesketh to be agreed upon. This extended the church 30 ft westwards by means of transepts, adding 524 more seats. In 1853 the church had its first Willis organ built (it was replaced in 1883 and repaired in 1997), with Henry Willis himself employed as the organist, and in 1871 plans were mooted for 'beautifying and improving' the church. These plans originally involved the demolition of the tower, but this was shelved on protests from William Morris, Edward Burne-Jones, Holman Hunt, Ford Madox Brown, Anthony Trollope, George du Maurier, Coventry Patmore, F. T. Palgrave, George Gilbert Scott Jr. and others, in favour of simple extensions westwards in 1877–78 designed by F.P. Cockerell (though these extensions moved the church's high altar to the geographical west end, rather than the more usual east end).

In 1911–12 the Vestries were improved by Temple Moore, who also added a Morning Chapel, whilst in 1958 the dark Victorian interior scheme was removed and the original lighter, whitewashed scheme reinstated. The building is Grade I listed.

The church has a fine musical tradition stretching back as far as Henry Willis. Under the direction of Martindale Sidwell it developed a national and international reputation as being a centre of excellence for parish music, which it maintains today with a fully professional choir as well as a junior choir and regular high-profile concerts. 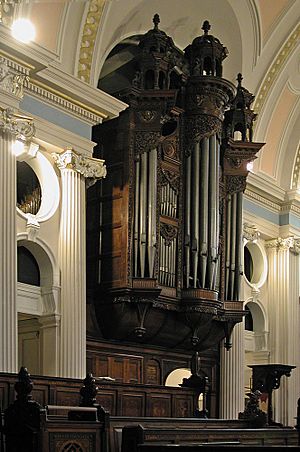 The early records of organs date from the middle of the 18th century. The current organ was installed by Henry Willis in 1884. Restoration and rebuilding work was undertaken by Harrison and Harrison in 1964, and Bower and Co in 2000. A specification of the organ can be found on the National Pipe Organ Register. and on the parish website.

By virtue of the Parochial Church Councils (Powers) Measure 1956, parochial church councils are entitled to levy a voluntary rate and, in 1986, Hampstead Parish Church's PCC decided to supplement their millennium redecoration appeal by this means. The levying of a voluntary rate on businesses and residents alike has now become a regular annual event. 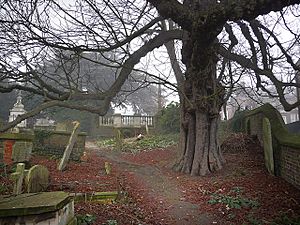 Notable individuals buried in its churchyard include:

All content from Kiddle encyclopedia articles (including the article images and facts) can be freely used under Attribution-ShareAlike license, unless stated otherwise. Cite this article:
St John-at-Hampstead Facts for Kids. Kiddle Encyclopedia.