Chutney (also transliterated chatney or chatni) is a family of condiments associated with South Asian cuisine made from a highly variable mixture of spices, vegetables, or fruit.

As with other condiments such as relish or mustard, chutneys are based on a wide range of recipes and preparation methods, they vary widely by geography, they can range from a wet to dry or course to fine and they can be combined with a wide variety of foods or used for dipping.

Chutneys can be made from almost any combination of vegetables, fruits, herbs and spices. Chutneys are usually grouped into sweet or hot forms; both forms usually contain spices, including chili, but differ by their main flavors. 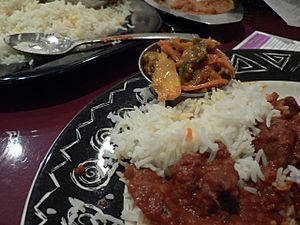 Vinegar, citrus, tamarind, or lemon juice may be added as natural preservatives. Chutneys may be ground with a mortar and pestle. Spices are added and ground, usually in a particular order; the wet paste thus made is sautéed in vegetable oil, usually gingelly (sesame) or groundnut (peanut) oil. Electric blenders or food processors can be used as labor-saving alternatives to stone grinding.

American and European-style chutneys are usually fruit, vinegar and sugar, cooked down to a reduction, with added flavorings. These may include sugar, salt, garlic, tamarind, onion, or ginger

Major Grey's Chutney is a type of sweet and spicy chutney popular in the United Kingdom and the United States. The recipe was reportedly created by a 19th-century British Army officer of the same name (likely apocryphal) who presumably lived in Colonial India. Its characteristic ingredients are mango, raisins, vinegar, lime juice, onion, tamarind extract, sweetening and spices. Several companies produce a Major Grey's Chutney, in the UK, the US, and India.

All content from Kiddle encyclopedia articles (including the article images and facts) can be freely used under Attribution-ShareAlike license, unless stated otherwise. Cite this article:
Chutney Facts for Kids. Kiddle Encyclopedia.