Julia Carolyn Child (née McWilliams; August 15, 1912 – August 12, 2004) was an American chef, author and television personality. She is recognized for bringing French cuisine to the American public with her debut cookbook, Mastering the Art of French Cooking, and her television programs, the most notable of which was The French Chef, which premiered in 1963. 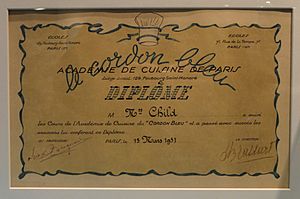 Julia Child was born Julia Carolyn McWilliams in Pasadena, California, the daughter of John McWilliams, Jr., a Princeton University graduate and prominent land manager, and his wife, the former Julia Carolyn ("Caro") Weston, a paper-company heiress whose father, Byron Curtis Weston, served as lieutenant governor of Massachusetts. Child was the eldest of three.

In high school, Child was sent to the Katherine Branson School in Ross, California, which was at the time a boarding school. At six feet, two inches (1.88 m) tall, Child played tennis, golf, and basketball as a youth and continued to play sports while attending Smith College, from which she graduated in 1934 with a major in History.

Child grew up with a cook who served her family. She did not observe or learn how to cook from the family's cook. Child did not learn to cook until she met her would-be husband, Paul, who grew up in a family very interested in food.

Following her graduation from college, Child moved to New York City, where she worked as a copywriter for the advertising department of W. & J. Sloane. 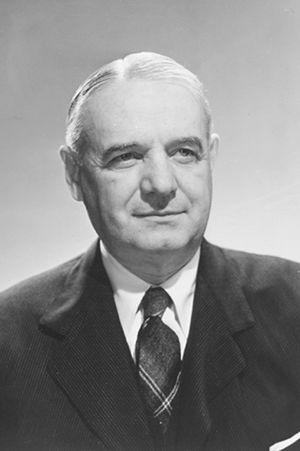 General William J. Donovan, who Child worked for as a top secret researcher

Child joined the Office of Strategic Services (OSS) after finding that she was too tall to enlist in the Women's Army Corps (WACs) or in the U.S. Navy's WAVES. She began her OSS career as a typist at its headquarters in Washington, but because of her education and experience soon was given a more responsible position as a top secret researcher working directly for the head of OSS, General William J. Donovan.

As a research assistant in the Secret Intelligence division, she worked at the OSS Emergency Rescue Equipment Section (ERES) in Washington, D.C. as a file clerk and then as an assistant to developers of a shark repellent needed to ensure that sharks would not explode ordnance targeting German U-boats.

In 1944, she was posted to Kandy, Ceylon (now Sri Lanka), where her responsibilities included "registering, cataloging and channeling a great volume of highly classified communications" for the OSS's secret stations in Asia. She was later posted to Kunming, China, where she received the Emblem of Meritorious Civilian Service as head of the Registry of the OSS Secretariat.

When Child was asked to solve the problem of too many OSS underwater explosives being set off by curious sharks, "Child's solution was to experiment with cooking various concoctions as a shark repellent," which were sprinkled in the water near the explosives and repelled sharks. Still in use today, the experimental shark repellent "marked Child's first foray into the world of cooking..." For her service, Child received an award that cited her many virtues. As with other OSS records, her file was declassified in 2008; however, unlike other files, her complete file is available online.

While in Kunming, she met Paul Cushing Child, also an OSS employee, and the two were married September 1, 1946, in Lumberville, Pennsylvania, later moving to Washington, D.C. A New Jersey native who had lived in Paris as an artist and poet, Paul was known for his sophisticated palate, and introduced his wife to fine cuisine. He joined the United States Foreign Service, and in 1948 the couple moved to Paris when the US State Department assigned Paul there as an exhibits officer with the United States Information Agency. The couple had no children.

The French Chef and related books 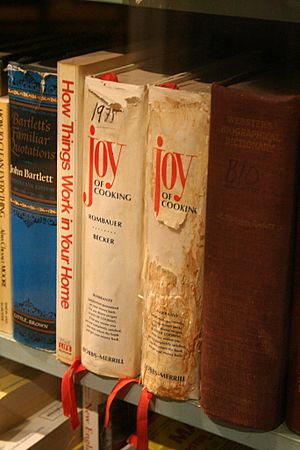 A 1962 appearance on a book review show on what was then the National Educational Television (NET) station of Boston, WGBH-TV, led to her first television cooking show after viewers enjoyed her demonstration of how to cook an omelette. The French Chef had its debut on February 11, 1963, on WGBH and was immediately successful. The show ran nationally for ten years and won Peabody and Emmy Awards, including the first Emmy award for an educational program. Though she was not the first television cook, Child was the most widely seen. In 1972, The French Chef became the first television program to be captioned for the deaf, even though this was done using the preliminary technology of open-captioning.

Child's second book, The French Chef Cookbook, was a collection of the recipes she had demonstrated on the show. It was soon followed in 1971 by Mastering the Art of French Cooking, Volume Two,. Child's fourth book, From Julia Child's Kitchen, was illustrated with her husband's photographs and documented the color series of The French Chef, as well as provided an extensive library of kitchen notes made by Child during the course of the show. 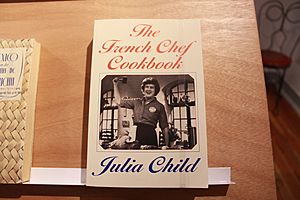 Julia Child had a large impact on American households and housewives. Because of the technology in the 60s, the show was unedited, causing her blunders to appear in the final version. According to Toby Miller in "Screening Food: French Cuisine and the Television Palate," one mother he spoke to said that sometimes "all that stood between me and insanity was hearty Julia Child" because of Child's ability to soothe and transport her with her cooking style. In addition, Miller notes that Child's show began before the feminist movement of the 1960s, which meant that the issues housewives and women faced were somewhat ignored on television. 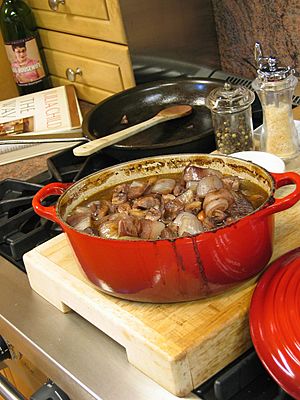 In the 1970s and 1980s, she was the star of numerous television programs, including Julia Child & Company, Julia Child & More Company and Dinner at Julia's. For the 1979 book Julia Child and More Company, she won a National Book Award in category Current Interest. In 1981, she founded the American Institute of Wine & Food, with vintners Robert Mondavi and Richard Graff, and others, to "advance the understanding, appreciation and quality of wine and food," a pursuit she had already begun with her books and television appearances. In 1989, she published a book and instructional video series collectively entitled The Way To Cook.

Child starred in four more series in the 1990s that featured guest chefs: Cooking with Master Chefs, In Julia's Kitchen with Master Chefs, Baking with Julia, and Julia Child & Jacques Pépin Cooking at Home. She collaborated with Jacques Pépin many times for television programs and cookbooks. All of Child's books during this time stemmed from the television series of the same names.

Julia Child's kitchen, designed by her husband, was the setting for three of her television shows. It is now on display at the National Museum of American History in Washington, D.C. Beginning with In Julia's Kitchen with Master Chefs, the Childs' home kitchen in Cambridge was fully transformed into a functional set, with TV-quality lighting, three cameras positioned to catch all angles in the room, and a massive center island with a gas stovetop on one side and an electric stovetop on the other, but leaving the rest of the Childs' appliances alone, including "my wall oven with its squeaking door." This kitchen backdrop hosted nearly all of Child's 1990s television series. 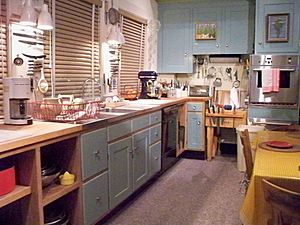 In 2001, Child moved to a retirement community, donating her house and office to Smith College, which later sold the house.

She donated her kitchen, which her husband designed with high counters to accommodate her height, and which served as the set for three of her television series, to the National Museum of American History, where it is now on display. Her iconic copper pots and pans were on display at Copia in Napa, California, until August 2009 when they were reunited with her kitchen at the Smithsonian's National Museum of American History in Washington, D.C.

In 2000, Child received the French Legion of Honour and was elected a Fellow of the American Academy of Arts and Sciences in 2000. She was awarded the U.S. Presidential Medal of Freedom in 2003; she received honorary doctorates from Harvard University, Johnson & Wales University (1995), Smith College (her alma mater), Brown University (2000), and several other universities.

On August 12, 2004, Child died of kidney failure in Montecito, California, three days before her 92nd birthday. Her last meal was French onion soup.

In 1995, Julia Child established The Julia Child Foundation for Gastronomy and Culinary Arts, a private charitable foundation to make grants to further her life's work. The Foundation, originally set up in Massachusetts, later moved to Santa Barbara, California, where it is now headquartered. The Foundation makes grants to other non-profits. The grants support primarily gastronomy, the culinary arts and the further development of the professional food world, all matters of great importance to Julia Child during her lifetime. 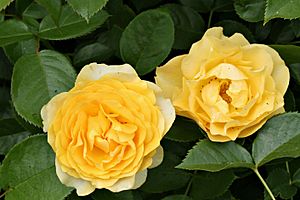 The Julia Child Rose cultivar is known for its yellow blooms

Beyond making grants, the Foundation was also established to protect Julia Child's legacy; it is the organization to approach to seek permission to use images of Julia Child and/or excerpts of her work.

The Julia Child rose, known in the UK as the "Absolutely Fabulous" rose, is a golden butter/gold floribunda rose named after Child.

All content from Kiddle encyclopedia articles (including the article images and facts) can be freely used under Attribution-ShareAlike license, unless stated otherwise. Cite this article:
Julia Child Facts for Kids. Kiddle Encyclopedia.