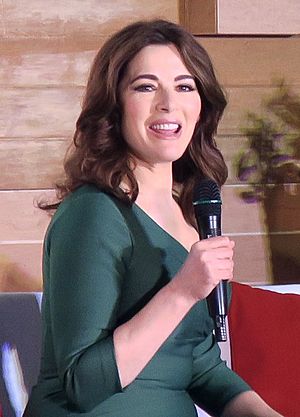 Nigella Lucy Lawson (born 6 January 1960) is an English television chef, journalist, television presenter and food writer. She was born in Wandsworth, London and is of Jewish descent.

She presented the cooking show Nigella Bites on Channel 4 from 2000 to 2001. After that series, she went on to present two cookery series called Nigella's Christmas Kitchen and Nigella Express on BBC Two.

She is a judge on the American reality show The Taste.

She has written many cooking books which have been translated into many different languages and are popular in the United Kingdom and the United States.

She is a daughter of politician Nigel Lawson.

All content from Kiddle encyclopedia articles (including the article images and facts) can be freely used under Attribution-ShareAlike license, unless stated otherwise. Cite this article:
Nigella Lawson Facts for Kids. Kiddle Encyclopedia.