Lady Margaret Hall (commonly referred to as LMH) is one of the constituent colleges of the University of Oxford in England, located at the end of Norham Gardens in north Oxford.

It was founded in 1878 as the first women's college in Oxford and has accepted both men and women since 1979. LMH admits both undergraduate and graduate students. In 2015 it ranked 23rd in Oxford's Norrington Table.

The current principal of the college is Alan Rusbridger.

The college's coat of arms features devices that recall those associated with its foundation. The portcullis is from the arms of Lady Margaret Beaufort, the bell is a symbol of the Wordsworth family, and the Talbot dogs represent Edward Talbot. Its colours are blue and yellow (sometimes also with white), and its motto is "Souvent me Souviens", an Old French phrase meaning "I remember often".

Lady Margaret Hall, the first women's college in Oxford, was founded in 1878 and opened its doors to its first nine students the following year. It was founded by Edward Stuart Talbot, then Warden of Keble College, and his wife Lavinia. The college was named after Lady Margaret Beaufort, mother of King Henry VII, renowned patron of scholarship and learning. Its first principal was Elizabeth Wordsworth, the great-niece of the poet William Wordsworth and daughter of Christopher Wordsworth, Bishop of Lincoln.

With a new building opening in 1894 the college expanded to 25 students which was intended to be the final number. However over the years LMH continued to expand.

In 1979, one hundred years after its foundation, LMH began admitting men as well as women; it was the first of the women's colleges to do so, along with St. Anne's.

In 2005 the college commissioned John Simpson Architects to prepare a masterplan for the enlargement of LMH. The first phase, the Pipe Partridge Building, was completed in early 2010. and was opened by the Chancellor of the University of Oxford, Lord Patten of Barnes, in April 2010. A new porters lodge, graduate centre and further accommodation are due to open in 2017. 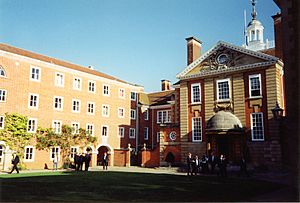 Students in the quadrangle outside Talbot Hall

Entrance Quad (to be named)

The college's oldest buildings are along the South East side of the entrance quad. The college's original house, a white brick gothic villa, is now known as Old Old Hall (1879), while the adjoining red brick extension is known as new old hall (1884).

The rest of the quad is currently under construction and will open in 2017. The Donald Fothergill Building will contain student accommodation and a porter's lodge. The Clore graduate centre will extend further out to the South East.

The architect of the main college buildings was Sir Reginald Blomfield who used the French Renaissance style of the 17th century and chose red brick with white stone facings. The central block, the Talbot Building (1910) on the North East of the main quad houses Talbot Hall and the Old Library (currently a reception and lecture room), while the accommodation for students and tutors is divided between three wings, the Wordsworth Building (1896), the Toynbee Building (1915) and the Lodge Building (1926).

Talbot Hall contains some fine oak panelling donated by former students to honour Elizabeth Wordsworth. The portraits in the Hall include the work of notable artists; among the portraits of principals is Sir J. J. Shannon's portrait of Dame Elizabeth, Philip de Laszlo's of Miss Jex-Blake, Sir Rodrigo Moynihan's of Dr Grier and Maud Sumner's of Miss Sutherland. In the Library is a fine marble statue by Edith Bateson.

On the North West is Lynda Grier (1962) housing the college library while on the South West Wolfson West (1964) which used to be the main entrance and porter's lodge. These buildings were designed by Raymond Erith. The ground floor of Lynda Grier was originally student accommodation but in 2006 it was converted into a law library it was opened that year by Cherie Blair.

To the North of the Main quad is the large Deneke block (1932) along with the hall and the college's Byzantine-style chapel. The chapel is in the form of a Greek cross was dedicated by the college's founder Edward Stuart Talbot, in January 1933. These were designed by Giles Gilbert Scott, famous for designing Liverpool Cathedral and the K2 red telephone box.

The back of Lynda Grier forms another quad consisting of an accommodation tower block Sutherland (1971) and the Pipe Partride Building (2010). Behind this is Sutherland's sister block Katie Lee (1972). The Pipe Partridge Building includes the 136-seat Simpkins Lee theatre, a dining hall, seminar rooms, JCR common rooms, and 64 new undergraduate study bedrooms. It won the Georgian Group award for the best new building in the classical tradition

Lady Margaret Hall is one of the few Oxford colleges on the River Cherwell and is known for its lovely gardens set in spacious grounds (about 12 acres (49,000 m2)). The grounds include a set of playing fields, tennis courts, a punt house and a manicured Fellows' Garden, hidden from view by tall hedgerows.

The grounds, along with those of Trinity College, Oxford, were the basis for Fleet College in the American author Charles Finch's novel set in Oxford University, The Last Enchantments.

The college's Middle Common Room (MCR) admits approximately 100 members each year and consists of around 160 members. Currently, each MCR member has the use of his/her own common room, consisting of a kitchen, TV room and lounge and his/her own computer room. Next year building will commence for a new graduate centre which will see increased facilities for the MCR, including a new common room as well as increased graduate accommodation. This building will be part of a large change to the front of the college. 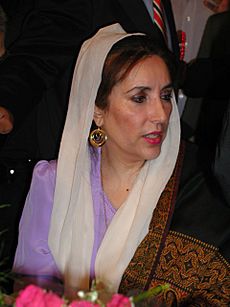 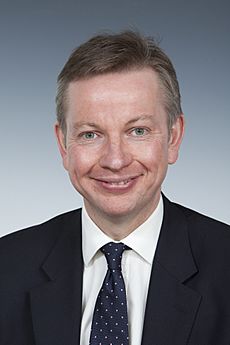 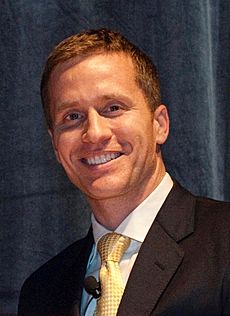 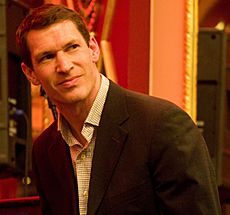 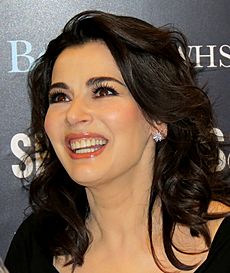 All content from Kiddle encyclopedia articles (including the article images and facts) can be freely used under Attribution-ShareAlike license, unless stated otherwise. Cite this article:
Lady Margaret Hall, Oxford Facts for Kids. Kiddle Encyclopedia.