Malala Yousafzai (born July 12, 1997 ) is a Pakistani student and education activist. She is known for her activism for girls' and women's rights, especially for her campaign to allow girls to go to school. She was a victim of a gunshot attack in October 2012.

Yousafzai is the youngest person to have won the Nobel Peace Prize. She was awarded the prize in October 2014, when she was just 17 years old. She was nominated for the prize the year before that.

Malala was born in the town of Mingora in the Swat. In 2009, at age 11, many people got to know her through a blog of the BBC News' Urdu language service. The BBC published translated writings about her life living with Taliban rule.

On 9 October 2012, Yousafzai was shot in the head and neck in an assassination attempt by Atta Ullah Khan, a Taliban gunman. She was given emergency treatment in Pakistan and then moved to Great Britain for more medical treatment.

On 3 January 2013, Yousafzai was discharged from the Queen Elizabeth Hospital in Birmingham to continue to recover at her family's temporary home in the West Midlands. She had two five-hour long operations on 2 February 2013. She had a titanium plate put over the hole in her skull and a cochlear implant so she could hear again.

In May 2012 David Trumble, an award-winning artist, made a cartoon of Yousafzai as a Disney princess as part of a drawing of other feminist icons that he had made into princesses that was in the Huffington Post. 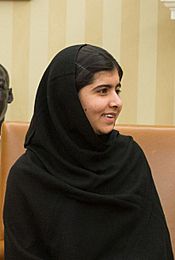 On 12 July 2013, at age 16, she made a speech at the headquarters of the United Nations, stressing the right to education for all and for human rights and peace and non-violence against terrorism and intolerance citing the proverb: "the pen is mightier than the sword". That October she was invited to meet President Barack Obama, Michelle Obama, and their daughter Malia in the Oval Office.

She wrote a book about her life, I am Malala: The Girl Who Stood Up for Education and Was Shot by the Taliban, which was published in October 2013. The book was banned in Pakistani private schools.

The Taliban have said that they still want to assassinate Yousafzai. She campaigned for girls rights and education. Many officials did not agree with her campaign.

Besides the Nobel Prize in 2014, Yousafzai has been honoured for her work many times. She was awarded prizes for her work.

All content from Kiddle encyclopedia articles (including the article images and facts) can be freely used under Attribution-ShareAlike license, unless stated otherwise. Cite this article:
Malala Yousafzai Facts for Kids. Kiddle Encyclopedia.