Malalai of Maiwand facts for kids

Kids Encyclopedia Facts
"Malalai" redirects here. It is not to be confused with Malala.

Malalai of Maiwand (Pashto: د ميوند ملالۍ), also known as Malala (Pashto: ملاله), or Malalai Anna (Pashto: ملالۍ انا, meaning Malalai the "Grandmother") is a national folk hero of Afghanistan who rallied Pashtun fighters during the Battle of Maiwand. She fought alongside Ayub Khan and was responsible for the Afghan victory at the Battle of Maiwand on 27 July 1880, during the Second Anglo-Afghan War. She is also known as "The Afghan Jeanne d'Arc" and as "The Afghan Molly Pitcher" to the Western world. There are many schools, hospitals, and other institutions named after her in Afghanistan. Her story is told in the Afghan school text books. No British or Afghan sources of that time ever mention her name or such an event occurring.

Malalai was born in 1861 in the village of Khig, about 3 miles southwest of Maiwand in the southern Kandahar province of Afghanistan. During the late 1880s, war broke out between Afghanistan and Great Britain, with the last war between the two states being in the 1840s. The British, along with their Indian forces, had launched a major expedition into Afghanistan from India. The main garrison of the British was located in Kandahar, which is the closest city to the town of Maiwand. The military of Afghanistan was represented by commander Ayub Khan, son of Afghan Emir Sher Ali Khan. Malalai's father, who was a shepherd, and her fiancé joined with Ayub Khan's army in the large attack on the British-Indian forces in July 1880. Like many Afghan women, Malalai was there to help tend to the wounded or provide water and spare weapons. According to local sources, this was also supposed to be her wedding day. 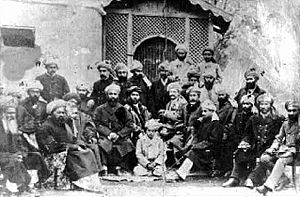 Afghan military commanders on 2 September 1880, about a month after their victory at the Battle of Maiwand.

When the Afghan army was losing morale, despite their superior numbers, Malalai took the Afghan flag and shouted:

Young love! If you do not fall in the battle of Maiwand,
By God, someone is saving you as a symbol of shame!

This inspired the Afghan fighters to redouble their efforts. When a lead flag-bearer was killed, Malalai went forward and held up the flag (some versions say she used her veil as a flag), singing a landai (a short folk-song sung by Afghan women):

With a drop of my sweetheart's blood,
Shed in defense of the Motherland,
Will I put a beauty spot on my forehead,
Such as would put to shame the rose in the garden!

Malalai was herself struck down and killed by a British soldier. However, her words had spurred on her countrymen to victory. After the battle, Malalai was honored for her efforts and buried in her native village of Khig, where her grave remains today. She was 18 or 19 at the time of her death. She is buried in the village of Karez along with her father and fiancé, locals regard her grave as a shrine.

My Malalai is living, and they praise others' beauty.
Though they have eyes, they are blind.

Malalai made an appearance in an animated opening scene of the documentary, He Named Me Malala.hi:मलाला मैवंद

All content from Kiddle encyclopedia articles (including the article images and facts) can be freely used under Attribution-ShareAlike license, unless stated otherwise. Cite this article:
Malalai of Maiwand Facts for Kids. Kiddle Encyclopedia.