He was initially educated at the Government College Lahore and the University of the Punjab, Lahore. For a time also worked at the Government College as a lecturer, adding considerably to its intellectual life. Later he went to Cambridge University, England for PhD studies. In 1951 he returned to Pakistan, but he found that he was cut off from the rest of the scientific world there. In 1953, he again went to England where he started to teach and research, having interest in the Grand Unified Theory. 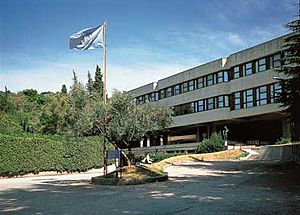 The Abdus Salam International Centre for Theoretical Physics was founded by Salam in 1964.

In 1964, Salam founded the International Centre for Theoretical Physics (ICTP), Trieste, in Italy and served as its director until 1993. In 1974, he founded the International Nathiagali Summer College (INSC) to promote science in Pakistan. The INSC is an annual meeting of scientists from all over the world who come to Pakistan and hold discussions on physics and science. Even today, the INSC holds annual meetings, and Salam's pupil Riazuddin has been its director since its start.

In 1997, the scientists at ICTP commemorated Salam and renamed ICTP as the "Abdus Salam International Centre for Theoretical Physics". Throughout the years, he served on a number of United Nations committees concerning science and technology in developing countries. Salam also founded the Third World Academy of Sciences (TWAS) and was a leading figure in the creation of a number of international centres dedicated to the advancement of science and technology.

During a visit to the Institute of Physics at Quaid-i-Azam University in 1979, Salam explained after receiving an award: Physicists believed there are four fundamental forces of nature; the gravitational force, the weak and strong nuclear force, and the electromagnetic force.[relevant? – discuss] Salam was a firm believer that "scientific thought is the common heritage of mankind", and that developing nations needed to help themselves, and invest in their own scientists to boost development and reduce the gap between the Global South and the Global North, thus contributing to a more peaceful world.

In 1981, Salam became a founding member of the World Cultural Council.

Although Salam left Pakistan, he did not terminate his connection to home. He continued inviting Pakistan's scientists to ICTP, and maintained a research programme for them. Many prominent scientists, including Ghulam Murtaza, Riazuddin, Kamaluddin Ahmed, Faheem Hussain, Raziuddin Siddiqui, Munir Ahmad Khan, Ishfaq Ahmad, and I. H. Usmani, considered him as their mentor and a teacher.

Abdus Salam was a very private individual, who kept his public and personal lives quite separate. He married twice; first time to a cousin, the second time in accordance with Islamic law. At his death, he was survived by three daughters and a son by his first wife, and a son and daughter by his second, Professor Dame Louise Johnson, formerly Professor of molecular biophysics at Oxford University. Two of his daughters are Anisa Bushra Salam Bajwa and Aziza Rahman.

Salam was an Ahmadi Muslim, who saw his religion as a fundamental part of his scientific work. He once wrote that "the Holy Quran enjoins us to reflect on the verities of Allah's created laws of nature; however, that our generation has been privileged to glimpse a part of His design is a bounty and a grace for which I render thanks with a humble heart."

During his acceptance speech for the Nobel Prize in Physics, Salam quoted verses from the Quran and stated:

"Thou seest not, in the creation of the All-merciful any imperfection, Return thy gaze, seest thou any fissure? Then Return thy gaze, again and again. Thy gaze, Comes back to thee dazzled, aweary." (67:3–4)

This, in effect, is the faith of all physicists; the deeper we seek, the more is our wonder excited, the more is the dazzlement for our gaze.

In 1974, the Pakistan parliament made the Second Amendment to the Constitution of Pakistan that declared Ahmadi to be non-Muslim. In protest, Salam left Pakistan for London. After his departure, he did not completely cut his ties to Pakistan, and kept a close association with the Theoretical Physics Group as well as academic scientists from the Pakistan Atomic Energy Commission. 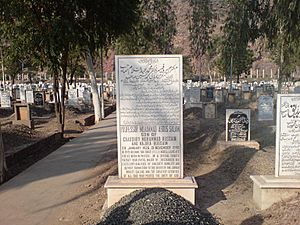 The grave of Abdus Salam at Rabwah, Pakistan with the word 'Muslim' obscured

Abdus Salam died on 21 November 1996 at the age of 70 in Oxford, England, from progressive supranuclear palsy. His body was returned to Pakistan and kept in Darul Ziafat, where some 13,000 men and women visited to pay their last respects. Approximately 30,000 people attended his funeral prayers.

Salam was buried in Bahishti Maqbara, a cemetery established by the Ahmadiyya Community at Rabwah, Punjab, Pakistan, next to his parents' graves. The epitaph on his tomb initially read "First Muslim Nobel Laureate". The Pakistani government removed "Muslim" and left only his name on the headstone. They are the only nation to officially declare that Ahmadis are non-Muslim. The word "Muslim" was initially obscured on the orders of a local magistrate before moving to the national level. Under Ordinance XX of 1984, being an Ahmadi, he was considered a non-Muslim according to the definition provided in the Second Amendment to the Constitution of Pakistan. 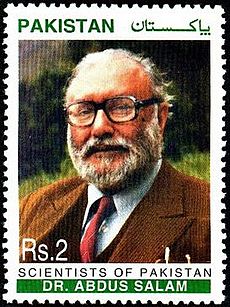 Salam's work in Pakistan has been far reaching and regarded as highly influential. He is remembered by his peers and students as the "father of Pakistan's school of Theoretical Physics" as well as Pakistan's science. Salam was a charismatic and iconic figure, a symbol among them of what they were working or researching toward in their fields. His students, fellow scientists and engineers, remembered him as brilliant teacher, and engaging researcher who would also influence others to do the same. Salam founded the Space Research Commission of and was its first director. In 1998, the Government of Pakistan issued a commemorative stamp to honour Salam as part of its "Scientists of Pakistan" series. His alma mater, Government College Lahore, now a university, has the Abdus Salam Chair in Physics and Abdus Salam School of Mathematical Sciences named after him. The Abdus Salam Chair was also established in his honour at the Syed Babar Ali School of Science and Engineering in the Lahore University of Management Sciences. He made a significant contribution towards the 2012 success in the search for the Higgs boson.

Salam has been commemorated by noted and prominent Pakistani scientists, who were also his students. Many scientists have recalled their college experiences. Ghulam Murtaza, a professor of plasma physics at the Government College University and student of Salam, wrote:

All content from Kiddle encyclopedia articles (including the article images and facts) can be freely used under Attribution-ShareAlike license, unless stated otherwise. Cite this article:
Abdus Salam Facts for Kids. Kiddle Encyclopedia.