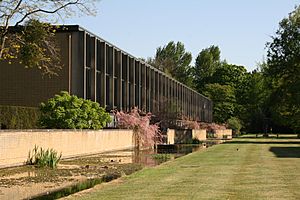 St. Catherine's College is one of the colleges of the University of Oxford. It is commonly referred to as "Catz". The college was founded in 1962, but its origins are older. In 1862, a "Delegacy for Unattached Students" was formed in Oxford. Students could join the Delegacy to become members of the University without being members of a college. Many students could not afford the cost of belonging to a college. The Delegacy came to be called "St. Catharine's [sic.] Club" after the name of the building at which its members met. In 1931, the Delegacy was officially renamed "St. Catherine's Society".

The Society obtained authority to become a full college in 1956. It purchased land from Merton College and built a modernist campus designed by Danish architect Arne Jacobsen. The College opened in 1962. It first admitted women students in 1974.

All content from Kiddle encyclopedia articles (including the article images and facts) can be freely used under Attribution-ShareAlike license, unless stated otherwise. Cite this article:
St Catherine's College, Oxford Facts for Kids. Kiddle Encyclopedia.