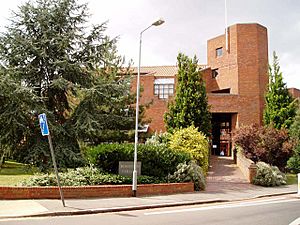 The entrance of Robinson College

Robinson College is one of the colleges of the University of Cambridge, England. It was created in 1977 so it is the newest college in Cambridge. It allowed both men and women from the start. Today, it has about 550 students. The college was opened by Queen Elizabeth II in 1981. Because it is new, it does not have many of the traditions of the older colleges. For example, students can walk on the grass in the college gardens.

It takes the name from David Robinson who gave £18 million to build the college. He also gave £3 million to build a new part of the Addenbrooke's Hospital in Cambridge. The buildings are made of red brick and are found in Grange Road, a few minutes away from the city centre of Cambridge.

Some important people have studied here, like Nick Clegg, the Deputy Prime Minister of the United Kingdom.

All content from Kiddle encyclopedia articles (including the article images and facts) can be freely used under Attribution-ShareAlike license, unless stated otherwise. Cite this article:
Robinson College, Cambridge Facts for Kids. Kiddle Encyclopedia.