Ann Noreen Widdecombe MEP (born 4 October 1947 in Bath, Somerset, England) is a British former politician. She was the Conservative Party Member of Parliament (MP) for the constituency of Maidstone and The Weald from 1987 to 2010.

Widdecombe is the daughter of a Ministry of Defence civil servant James Murray Widdecombe and Rita N Plummer. She attended the Royal Navy School in Singapore, and a convent school in Bath. She then read Latin at Birmingham University and later attended Lady Margaret Hall, Oxford, to read Philosophy, Politics and Economics (PPE). She worked for Unilever (1973–75). She was then an administrator at the University of London (1975–87) before entering Parliament.

She was first elected to the House of Commons at the 1987 General Election. From 1995 to 1997, she was the Minister of State for Prisons. Ann Widdecombe served in William Hague's shadow cabinet from 1997 to 2001. Widdecombe retired from politics at the 2010 general election.

She is a committed animal lover. She is one of the few Conservative MPs to have consistently voted for the ban on fox hunting.

Widdecombe was a contestant in the 2010 series of Strictly Come Dancing. In 2002 she took part in a Louis Theroux television documentary. It showed her life, both in and out of politics. She was cast as herself in an episode of the science-fiction drama Doctor Who.

On 23 April 2012, Widdecombe presented an hour-long documentary for BBC Radio 5 Live. It was Drunk Again: Ann Widdecombe Investigates, looking at how the British attitude to getting drunk has changed over the last few years. 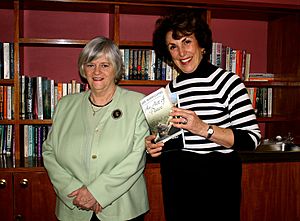 All content from Kiddle encyclopedia articles (including the article images and facts) can be freely used under Attribution-ShareAlike license, unless stated otherwise. Cite this article:
Ann Widdecombe Facts for Kids. Kiddle Encyclopedia.