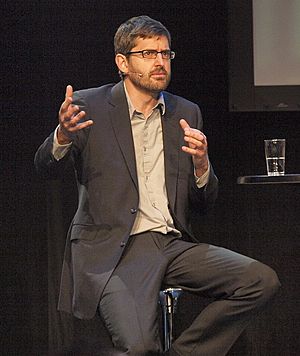 Louis Sebastian Theroux (born 20 May 1970) is an English-American broadcaster. He is best known for his investigative series such as When Louis Met, Louis Theroux's Weird Weekends, Louis Theroux's BBC Two Specials.

Theroux was born in Singapore and is a dual citizen. He moved to London when he was a year old. He was educated at Westminster School and Magdalen College, Oxford where he gained a degree in history. In 2013, he moved to Los Angeles. Theroux's mother is British; his father is American writer Paul Theroux.

He is an atheist.

All content from Kiddle encyclopedia articles (including the article images and facts) can be freely used under Attribution-ShareAlike license, unless stated otherwise. Cite this article:
Louis Theroux Facts for Kids. Kiddle Encyclopedia.