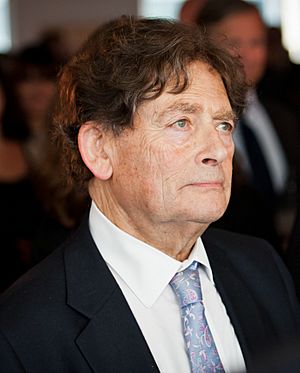 Nigel Lawson, Baron Lawson of Blaby PC (born 11 March 1932) is a British Conservative politician. He was born in Hampstead, London, and is of Jewish descent.

He was educated at Westminster School and Christ Church, Oxford, where he got a degree in Philosophy, Politics and Economics. He was a journalist during the 1960s. Lawson was a Member of Parliament from 1974-1992. He was Chancellor of the Exchequer from 1983-1989. Lawson was made a life peer in 1992.

Lawson has six children. They are: Dominic (a journalist), Thomasina (who died of breast cancer), Nigella (a food writer), Horatia, Tom and Emily.

All content from Kiddle encyclopedia articles (including the article images and facts) can be freely used under Attribution-ShareAlike license, unless stated otherwise. Cite this article:
Nigel Lawson Facts for Kids. Kiddle Encyclopedia.